By DOUG COLLETTE
September 18, 2016
Sign in to view read count 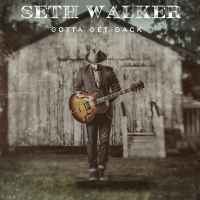 With Gotta Get Back, Seth Walker aligns himself with arguably the most authentic of Americana artists, the The Wood Brothers. Both siblings contribute to this, the ninth album of the Southern-born and raised songwriter/musician, while the 'adopted' member of their brethren, Jano Rix, produced the record, adding not only his own multi-instrumental and vocal skills, but setting a casual tone that helped in no small part to conjure the inviting ambiance of this album.

As such, this alliance is an extension of Seth Walker's re-connection with his own family and their musical leanings, which in turn imbues Gotta Get Back with a continuity that elevates its resonance with roots and, in turn, its legitimacy musical legitimacy. This is no contrived Americana homage, so "Home Again," grounded by Chris Wood's stand-up bass, rings as true in its sense of place, as does "Blow Wind Blow, " written with Oliver Wood, in its recognition of constant change.

It should come as no surprise then, that the arrangements of this original material of Walker's most written in collaboration with other composers, reflects the breadth of his diverse family as pictured within the array of photographs in the appropriately homespun design of this triple-fold digi-pak. Gotta Get Back is akin to an aural family album as it simultaneous revisits past experience even as it revitalizes new and future experience.

This mix of emotion renders the joy of the easygoing opener "High Time," as well earned as the inner motivation of "Fire in the Belly" and that tracks gains credence in its juxtaposition with "Back Around." The group vocals deliberately invoke strains of gospel music often left merely implied in this man's songs (as on "Call My Name"), but the blend sounds so spontaneous and natural here, its credibility rises further when a tangible strain of reggae appears within "Turn This Thing Around;" a glowing electric piano line weaves in and out of the playing. the very next track "Dreamer," reaffirming the accurate eclecticism Seth Walker's nurtured over the course of his career

Along those lines, it's perfectly appropriate this album was recorded in various locations besides Zac Brown's Southern Ground studios: the fluidity reflects Walker's movement to and from musical hotbeds of America including Austin, Texas, the Nashville site of the main recordings and Walker's adopted new home of New Orleans. Yet the frisky hop of "Way Past Midnight" almost lends the impression these dozen tracks here were recorded in one fell swoop, in sequence, as does the inherent drama of the title song: a suspenseful tension emanates directly from what's most likely the custom acoustic guitar Seth Walker used for these sessions.

The artist reunited estranged members of his immediate circle (notably in his home of North Carolina) to play on Gotta Get Back, specifically the strings that appear on the latter track and "The Sound of Your Voice," where a spacious effect derives from cellos and violins, arranged by Seth's dad Scott, thereby reinforcing the low-key immediacy of the sound on the various tracks: kudos to Rix and engineer Mike Poole for preserving that atmosphere.

There's also a warm informality radiating from Walker's singing, during "Movin' On," to name just one cut, making what might otherwise sound cliched in actuality a reclaims of the truth at the heart of the truism in the song title. As such, it's a microcosm of the larger statement that is Seth Walker's Gotta Get Back.

High Time; Fire In The Belly; Back Around; Call My Name; Movin’ On; Way Past Midnight; Home Again; The Sound Of Your Voice; Turn This Thing Around; Dreamer; Gotta Get Back; Blow Wind Blow.