By JEFF WINBUSH
October 8, 2013
Sign in to view read count 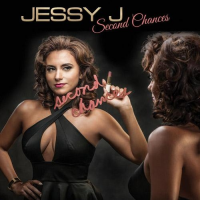 It's a paradox that what distinguishes Jessy J was the very thing she did not put enough emphasis upon; being a female Latin jazz artist. Through three albums of solid, if standard, smooth jazz grooves enlivened somewhat by more distinctive outbursts of originality the lady known as Jessica Spinella stumbled with the blandly generic Hot Sauce (Heads Up, 2011).

In every musician's career a time comes when they must choose to follow a path to success chartered by others or one chartered by themselves. Perhaps Jessy J realized she was marginalizing herself as just another smooth jazz saxophonist in an overcrowded field and decided it was time for a course correction.

Either way Second Chances shows a musician willing to take chances even if they aren't big chances. It's still a compliment as Hot Sauce failed to be little more than product. Here, with Jessy J handling the production chores herself, she isn't going for complete reboot as much as a conceptually constructed album built around original compositions on the number two ("Listen 2 the Groove," "Second Chances," "Tango for Two," "Dos," "Double Trouble," "Twice") and a few covers, Eugene McDaniels' classic "Feel Like Makin' Love" and "Magalenha" by Sergio Mendes.

The result is the most fully realized album of the young musician's career and certainly her most consistent. Playing alto, tenor, soprano and baritone sax as well as flute, Jessy J shows off her versatility. Her breathy, girlish vocals on "Feel Like Making Love" won't make anyone forget Roberta Flack, but the support from Bryant Sinono (bass), Tim Stewart (guitar) and Norman Jackson (keyboards) from her own band step up and elevate the tune from a skip to at least listenable.

In the shift to put smooth jazz riffing aside to get closer to her Latin roots Jessy J is ably assisted by Jeff Lorber and Johnny Britt, a multi-instrumentalist, vocalist and songwriter who takes a lead vocal turn on the jumpin' "Mambo Gumbo" penned by Jessy J and Joe Sample. It doesn't hurt that her playing here is easily her best on record. Jessy J's confidence and skill has done nothing but grown and whether she's jamming on the tenor sax with Lorber and Jimmy Haslip on "Tango for Two" or soaring as she alternates between soprano and flute the lady does not fail to impress.

Initially, Jessy J seemed fated to be just another underachiever playing her saxophone competently if not memorably. Despite this being her fourth album, she truly seems to have made the most of a second chance to distinguish herself from a crowded field of players and by getting back to basics Second Chances is reason enough to give her a second listen.