By SETON HAWKINS
November 1, 2005
Sign in to view read count 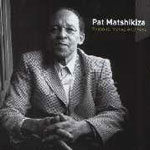 Seasons, Masks And Keys functions as a retrospective of pianist and composer Pat Matshikiza's career. It is a long-overdue attempt to bring more recognition to this highly influential, yet underrecorded figure in South African jazz. Although nobody questions his status as one of the genre's great figures, given his 1975 landmark recording Tshona!, Matshikiza recordings are rare and difficult to come by. This album, perhaps, is the first step to fixing this problem.

The recording consists of pieces Matshikiza has written over the past fifty years, plus two covers. Given the timespan, it stands to reason that the music covers a number of styles, from the 1970s jazz-funk of "Amaqhawe" to the blues-tinged "Vula Mama" and the slower jazz waltz "Tribute." Every composition showcases his undeniable mastery of melody—lyrical, easygoing, yet often unpredictable melodic lines. Matshikiza is one of South Africa's greatest composers, able to leap from genre to genre without ever losing his unique lyrical gifts.

Additionally, many of the tunes are written for vocals, and the singers here are phenominal. In particular, Zandile Hlatshwayo's performance on "Imali Yami" channels Busi Mhlongo in her ability to range from gentle, seductive singing to powerful, forceful calls at the drop of a hat. Additionally, Siphokazi Maregana's smoky voice and blues-influenced delivery result in a gorgeous performance of "Vula Mama."

However, the album faces difficulties in these vocal tunes, which make up the first half. While the vocalists are excellent and the backing band is very good, one can't help but feel that the band is consistently settling into too easy a groove—not taking enough risks, not projecting enough force (a notable exception is the maskanda-influenced track "Gqibele Nini?"). As his 1971 recording demonstrates, Matshikiza's piano playing has a gospel-powered forcefulness, which is absent at points in this album.

Nevertheless, by track eight, all problems are solved. The music moves from vocal to instrumental compositions, and Feya Faku and Sidney Mnisi join the group on trumpet and tenor saxophone, respectively. Faku's dark tone and subtle solos, combined with Mnisi's Coltrane-like tone, are the perfect vehicles for Matshikiza, who seems to be aiming for a warmer, less "raw" sound on this album.

Proof of this can be found in the album's re-recording of "Tshona." It is impossible to match the driving bass line of Alec Khaoli or the sheer power of Kippie Moeketsi and Basil Coetzee on saxophones, so the group opts for a different approach in the new version. "Tshona" takes on a darker, warmer sound in the horns, while the rhythm section lays back somewhat and drives the piece along in a more grand, stately tone.

Closing the album is a bonus track entitled "Umthandazo," a gorgeous piano/guitar duet between Pat Matshikiza and Lawrence Matshiza, the album's producer. Its stark, lyrical beauty make it stand out from the other tracks, yet it seems the most fitting way to close the album. Hearing Matshikiza on this pared down track offers a testament and reminder of why he's a piano legend.