BY IAN PATTERSON
March 4, 2011
Sign in to view read count 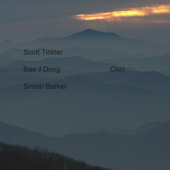 If the earth's core had a voice it would probably sound like Bae il Dong's. Bone-shudderingly powerful and utterly primal, his delivery is both awe-inspiring and just a little unnerving. Dong has the bass profondo of an opera singer and the raw, emotional power of the finest flamenco or qawwali singers. His sound is that of the human soul uncaged; whether song or wounded cry, it is the blues by any other name, Korean style. Dong's art is pansori—the traditional spoken and sung story telling theater of Korea. Together with drummer/percussionist Simon Barker and trumpeter Scott Tinkler—respected Australian jazz improvisers—the trio produces a bold music which celebrates music for music's sake, irrespective of meaningless categories, yet respectful of tradition. The coupling of pansori and jazz is not really so farfetched or "out there," as rhythm and improvisation are of equal importance to both traditions.

The two-part "Chirisan Sinawi" opens with Tinkler's choked trumpet emitting high-pitched whinnying like a small bamboo whistle, though by and by he finds fuller voice in short, rasping exclamations. Dong bursts in dramatically; his primal scream raging against Tinkler's energetic contrapuntal runs. Barker's rhythms build subtly, coaxing and mirroring the intensity and contours of the vocals. After seven intense minutes calm ensues and Barker's softly pattering percussion has an effect like fat rain drops sliding from leaves at storm's end.

The second part evolves from this lull; trumpet is subdued and Dong's gravelly yet unmistakably tender voice stirs small pockets of silence. This reverie is jolted by Barker's sharp drum raps, very much in the pansori style exemplified by the late Kim Seok-Chul, a singer/percussionist whose playing has greatly influenced Barker's approach to the drums. Kim Seok-Chul was a shaman reputed to be able to communicate with the dead. Dong is no shaman, but his voice could wake the dead, and haunt them eternally. The quietly gathering thunder of drums and urgent trumpet, darting like streaks of lightening, are swept up by Dong's long, rasping intonations. The singer eventually cedes to Barker's own fury and a final crashing cymbal brings a quite exhilarating 15 minutes to an end.

A casual listen could lead to the simple conclusion that the remaining music follows much the same pattern, but deeper attention is rewarded with the subtle but powerful dynamics at play. An almost subliminal vibration of gongs introduces "Echoes," the shadow and light between Tinkler's tortured trumpet squeals—as though deprived of air—and Dong's lung busting roar, Barker's maze of inventive, sympathetic rhythms and timbres, the staccato sharpness of somewhat unexpected lyrics from the singer in sharp contrast to his drawn out, wordless cry, and, notably, silences.

The stirring lament which is "Chiri" has special significance for both Dong and Barker. Chiri is a mountain in the southern Sobaek range of Korea where Dong spent seven years camped beside a waterfall at which he sang/howled for 18 hours a day—bursting his ear drums in the process—in order to build his voice for performances which can last upwards of seven hours. This was the original pansori training dating back to the 18th century, though perhaps unsurprisingly the practice has waned in modern times. Precisely why Barker was on Chiri mountain is recounted in Emma Franz's captivating documentary Intangible Asset No. 8, Bae il Dong, where the seeds of this collaboration were sewn.

Korean pansori was traditionally limited to a singer accompanied by a drummer, but like jazz, pansori has evolved over time, adding diverse instrumentation. The largely instrumental "Five Companions" features a free improvisation from Tinkler and an extended turn from Barker, whose rhythms wax and wane. All three voices merge and play off each other on the closing "Links," before Dong retires to leave Tinkler and Barker to fire each other's engines. Gradually, the music winds down, the trumpet shrinks to a barely perceptible whine, the drums diminish and all the sound disappears back into the bowels of the earth from where it came, though the reverberations linger long after the final note.