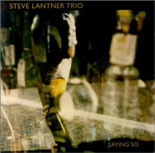 Based on two previous outings for Leo Records, modern jazz/improvising pianist Steve Lantner's radiantly novel approach contains the stuff that provides the earmarks for a fruitful career. He has recorded with Mat Maneri (violin) and Joe Morris (guitar) yet here, Morris switches over to the bass while Laurence Cook (drums) rounds out this high-spirited trio date. Lantner's mode of execution is rooted upon an understated sense of urgency, awash with symmetrical patterns and Thelonious Monk-like use of space and meter.

Throughout these four pieces, the pianist melds free jazz with a bop mindset atop the rhythm section's swaying frameworks and variegated foundations. No doubt, Lantner is an inventor who pushes his craft to the limits. On "Saying So," the artist's animated employment of block chords augments a series of deft right-hand leads and pursuance of clipped themes. The group dishes out oscillating micro-motifs to coincide with a sequence of contrasting statements during, 'Jangle.' In addition, Lantner performs as though there are two distinct psyches on the loose! Morris executes rapid walking bass lines while Cook maintains the pulse with steady strokes on his ride cymbal and shrewdly actuated dynamics.

The musicians' shifting rhythmic digressions provide alternating dimensions to many of these briskly rendered soundscapes. Essentially, they investigate the free zone but perform with the refinement and elegance of a seasoned and well-disciplined jazz piano trio. This wonderful outing should not slip into a state of secrecy! Compulsory listening!

Saying So; Once Through; Jangle; Under The Sun.