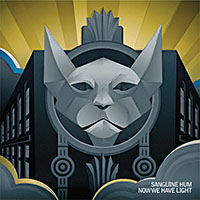 Sometimes things take a long time to gestate in the minds of musicians, but Sanguine Hum may well be eligible for entry in the Guinness Book of World Records— if there was such a category (and if there isn't, perhaps now there should be)—for Longest Time to Bring a Musical Concept to Fruition. OK, it's a clunky name and someone at Guinness will have to do better, but with the double-disc concept album Now We Have Light, Sanguine Hum has finally, well, brought to fruition an idea that's been gestating for 12 years, long before the group existed in its current form but, instead, was a conglomeration monikered Antique Seeking Nuns. A similarly self- effacing group with clever album titles like Careful! It's Tepid (Troopers for Sound, 2009) and Mild Profundities (Troopers for Sound, 2001), Antique Seeking Nuns featured three future Hummers in guitarist/vocalist Joff Winks, keyboardist Matt Baber and bassist Brad Waissman.

That Winks and Baber also collaborated in an ambient/electronica duo called Nunbient (again with the nuns) and that Antique Seeking Nuns—whose emphasis was more on the instrumental side of the equation—also existed, with an identical lineup that also included drummer Paul Mallyon, as the more mundanely named and song-oriented Joff Winks Band, might be just an irrelevant bit of trivia...except that clearly the lessons learned and explored in Antiques Seeking Nuns, Nunbient and the Joff Winks Band all had a place in the ultimate emergence of Sanguine Hum in 2012 with its critically acclaimed debut, Diving Bell and equally lauded studio follow-up, 2013's Weight of the World (both Esoteric Recordings), with No- Man/Henry Fool drummer Andrew Booker replacing Mallyon and completing the Sanguine Hum lineup before the group'a brief 2012 North American tour.

A tour documented on the similarly superb CD/DVD release, Live in America (Esoteric, 2014), which filled the gap between Weight of the World and Now We Have Light quite nicely, not only drawing on Sanguine Hum material and music dating back to Antique Seeking Nuns' Double Eggs with Chips and Beans (and a Tea) (Trooper for Sound, 2006), but providing a then-unknown sneak peak into Now We Have Light with the inclusion of the harder-edged instrumental "Cat Factory" and "Derision," a song whose roots feel linked to Canterbury guitar hero Steve Hillage while ultimately sounding nothing like him.

That the lyrics Winks sings on "Derision" make less sense in the context of a discrete song culled from the broader-conceptualized Now We Have Light is of no real consequence; taken on their own, they still possess something simultaneously serious and wittily articulated:

"A simple fact
I neglect,
speaking now in retrospect.
People here are hard to trust.
What was I thinking?"

A quality not unlike much of the music that came out of Canterbury in the 1960/70s from groups like Egg, early Soft Machine and Hatfield and the North—the latter, in particular, one of the more important of Sanguine Hum's many touchstones (along with everything from Frank Zappa and Steve Reich to Bass Communion, Mahavishnu Orchestra and ECM Records). While the members of Sanguine Hum are unmistakably accomplished musicians who live in the world called post-progressive rock, their music possesses the same lack of self-importance, excess and "look at me" attitude that some say plagued many of progressive rock's bigger names but which those Canterbury bands managed to largely avoid.

Sanguine Hum may, in fact, be based in Oxford, England, but they're Canterburians at heart...albeit Canterburians of an unmistakably modern bent with a similarly bizarre sense of humour and a belief that, no matter how complex the music gets, melody—albeit pushed to its greatest extremes—remains paramount. Sanguine Hum may have many touchstones in the past, but its music is undeniably 21st century...in the case of Now We Have Light, perhaps, even farther ahead, as its story takes place at an unidentified future time when the story's hero, Don (just Don), has been the cause of an apocalyptic event that has reduced the earth to "The Circle"—a gated community constructed by rich survivors to protect themselves from the consequences of a ravaged planet—and the nearby village of ramshackle homes that survive only due to its proximity to "The Wheel." It's in one of these homes that Don lives, with both his neighbors and those living in "The Wheel" thankfully (for him) unaware that he was the singular creator of all their woes.

Now We Have Light revolves around the premise of a hero who may have caused a global apocalyptic event, but remains an inventive chap who, in addition to eking over a hundred cups of tea from a single teabag, discovers a new source of clean and renewable energy based on two fundamental truths: that when a cat falls it always lands on its feet; and that if you butter a slice of toast and drop it, it invariably falls on the buttered side. What, then, are the paradoxical possibilities when you butter a cat's back and drop it?

Now We Have Light may ultimately be a circuitous tale that, just as The Lamb Lies Down on Broadway (Charisma, 1974) did, ends back where it began, but unlike Genesis' progressive rock classic, it is not the end of the story, its booklet promising that "Don will return in Now We Have Power."

This is all good news, of course, but what's most important beyond Now We Have Light's strange and wondrous story is that this is, indeed, Sanguine Hum's most fully realized album to date. It's all too easy to say that double- disc concept albums are "bold," "sweeping" and "ambitious," and there's no doubt that plenty of folks will aptly use such words to describe Now We Have Light. But beyond such broad generalizations, what lies at the core of Sanguine Hum and its 83-minute epic is a sense of construction that combines knotty (but always singable) themes with complex compositions that never seem to take themselves too seriously, even though they'd challenge most bands to match. And amidst all the challenge is, at times, wonderful, almost folkloric simplicity—like at least part of "Drastic Attic," where Don discovers, along with some strange bubbles (whose purpose is later revealed), and an old blueprint with the word "DRASTACATIC" written on it, which leads to his discovery of the "Buttered Cat Theory of Perpetual Energy."

OK, now you know what the paradoxical possibilities are when you butter a cat's back and drop it.

Now We Have Light truly combines the best of all that came before Sanguine Hum—the ambient, electronic textures of Nunbient; the long-form instrumental explorations of Antique Seeking Nuns; and the allegiance to song form of the Joff Winks Band—into a seamless whole that, like Hatfield and Zappa, embeds elements of jazz without ever actually sounding like jazz. Sanguine Hum comes closest on the five-part, 11-minute "Spamming the Eternal Abyss" and following "Bubble Trouble" that form the album's climax, with guest vibraphonist Jim Hart soloing with reckless abandon and joining the rest of Sanguine Hum in navigating the knotty, idiosyncratic written constructs with similar aplomb before the synth-laden, album-ending "Settle Down" promises, after all of Don's strange events and multi-dimensional travel through time and space, that "surely there's nothing wrong with what's happening to Don."

There may well be nothing wrong with what's happening to Don, but we'll not know for sure until Sanguine Hum delivers the promised Now We Have Power. Until then, Now We Have Light not only kickstarts Don's story, it's quite simply the group's best album to date. And with two superb studio albums and one live release already behind them, that's no small praise. If Diving Bell and Weight of the World were more than worthy predecessors that began the delivery of promises from a group of players who have been working towards this for more than a decade, then Now We Have Light is the first album—a masterpiece, even—to completely deliver on those promises, as well as being a welcome harbinger of even better things to come.