Sabine Meyer – The Art of the Clarinet 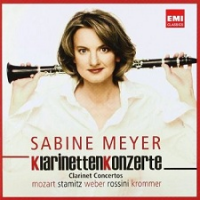 The Twentieth Century and beyond have seen the finest classical clarinetists: Jack Bymer, Martin Frost, Emma Johnson, Sharon Kam, Thea King Dieter Klocker, Anthony Pay, Richard Stoltzman and David Weber. Belonging among these names is the exquisite German Sabine Meyer, who, more than all others, save Klocker, reintroduced names like Krommer, Stamitz, and Spohr to the big-label repertoire. EMI and Warner Classics have finally done the decent thing and released all of Meyer's major performances from every period in her career.

Two sets of five CDs each are packaged at a more than reasonable price, making this music accessible to most all. Meyer on both sets proves her mettle in the 18th Century repertoire with two performances of Mozart's Clarinet Concerto in A, KV 622—in Volume 1, recorded with the Staatskapelle Dresden, directed by Hans Vonk; in Volume 2, with the Berlin Philharmonic, directed by Claudio Abbado (this second performance being superior to the first, by a mile). 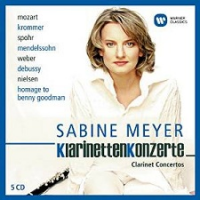 Meyer demonstrates her superiority outside the German realm on Debussy's "Premiere Rapsodie" and Takemitsu's exceptional "Fantasm/Cantos." She has much fun with Rossini's clarinet music as well as Weber's fine compositions. The biggest treat is the inclusion of material from her Homage to Benny Goodman (EMI Classics, 2013), upon whose stage Meyer shares duties with her brother Wolfgang. Featured are 20th Century masters who composed for Goodman: Arnold, Copland, Stravinsky and Bernstein. In addition to the classical, the pair spar on some of Goodman's better known tunes: "Sing, Sing, Sing," "Tiger Rag" and "Good-bye." The arrangements are rich and inventive. The repertoire is top-notch. Wow!