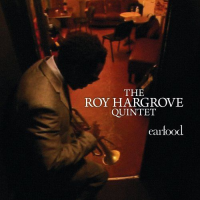 Trumpeter Roy Hargrove emerged into jazz consciousness as one of the "young lions" who beamed into the late 1980s and early 1990s. Other notable contemporary trumpeters include Terence Blanchard, Nicholas Payton, Kermit Ruffins, and Wallace Roney. All are associated with different genre traditions, Hargrove's being most closely associated with Lee Morgan.

Hargrove's association with Morgan's style nevertheless has not prevented the young trumpeter from approaching music from a broad perspective. Hargrove and his Latin-Cuban band, Crisol, won a Grammy Award in 1998 for Habana (Verve, 1997). Hargrove participated in pianist Herbie Hancock's Directions in Music (Verve, 2002), earning a second Grammy Award.

Hargrove does not limit himself to "jazz," however. He has also been active in the neo-electric-funk-soul arena with his band RH-Factor, releasing Distractions (Verve, 2006). If Roy Hargrove has been approaching his time to shine, it is here now.

Hargrove returns to his roots with Earfood. "My goal in this project is to have a recording that is steeped in tradition and sophistication, while maintaining a sense of melodic simplicity." One would suspect that many of Hargrove's generation desire the same projects. That said, Hargrove enjoys complete success in achieving his goal with Earfood.

The opening cut, "I'm Not So Sure," is a Cedar Walton composition Hargrove learned while playing with the pianist a number of years ago. The piano head is typically Cedar Walton—a rhythmically and harmonically complex line that is splendidly integrated in such a way that it updates the sound pioneered by Lee Morgan on such songs as "Cornbread," "The Sidewinder" and "The Rumproller." Where Morgan's introductions were firmly steeped in the hard bop tradition, Hargrove transforms the idea into an updated post bop realm.

Where Hargrove truly puts on his Morgan shoes is when he begins his solo on "I'm Not So Sure." It is exquisitely reminiscent of Morgan's famous solo on Bobby Timmons' "Moanin.'" Hargrove spits his opening four solo notes out with the funk authority author David H. Rosenthal described as "bad" in his book Hard Bop: Black Music and Jazz 1955-1965 (Oxford University Press, 1992).

Walton's composition also gives the standard trumpet/saxophone quintet a facelift. Justin Robinson offers Hargrove a compelling reed foil. Robinson's alto saxophone vibrato recalls Johnny Hodges with the modern chops of Greg Osby. It is not too great a reach to imagine updated Miles Davis or the Jazz Messengers from this band.

While Hargrove is redefining the hard bop of the 1950s and 1960s through the post bop lense of the 1980s and 1990s, he further deeps his ballad and slow-tempo burner chops with original compositions like the muted "Brown," conceived while Hargrove was recording Directions in Music with Hancock and saxophonist Michael Brecker, and the lilting "Starmaker," featuring Hargrove on flugelhorn.

"Strasbourg/St. Denis" shows Hargrove's pop and R & B stripes. The listener can well imagine clever soul lyrics sung above this song (Al Green, perhaps). "The Stinger" is a breezy post bop tune that gently swings, stopping well short of turning into a cooker. Robinson's cylindrical solo dispels into Hargrove's muted introspection. "Mr. Clean" combines the R & B of "Strasbourg/St. Denis" with the Lee Morgan badness of "I'm Not So Sure." Hargrove delivers another thrilling open-bell solo, languid and sure. One can't help liking the direction this jazz is headed.

The majority of the disc is devoted to slower, simpler ballad pieces. "Rouge," "Style," "Divine" and "Speak Low" all cast Hargrove, Robinson, and their rhythm section of pianist Gerald Clayton, bassist Danton Boller and drummer Montez Coleman in a fully realized ensemble mode where even the solos sound as if they were conceived by the group. It is in this environment that Roy Hargrove sounds most comfortable and where he and his fine quintet produce one of the most exceptional small-group recordings in recent memory.