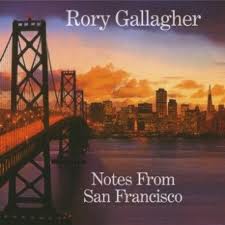 The level of excellence to which the archiving of singer/guitarist Rory Gallagher's canon has risen lately, on audio and video, hits another peak with Notes From San Francisco. Consisting of an entire, previously unreleased studio album, plus outtakes, in addition to a complete, previously unreleased concert recording, this double CD package also shows the attention to detail aficionados love—and which the nascent devotee of the late Irish bluesman will find enticing.

The studio portion of the set, recorded on the cusp of 1977-1978 in San Francisco with Elliot Mazer, was intended to be the follow-up to Calling Card (Chrysalis, 1976), but was forbidden release by Gallagher, due to his impatience with the mixing and his decision to record in a more primitive milieu.

Certainly, with the percussion on "B Girl," the violin of Joe O'Donnell on "Mississippi Sheiks," and Martin Fierro's sax during "Rue The Day" and "Brute Force And Ignorance," there are touches of color unusual for a Gallagher album. But these nuances do nothing to undermine the muscular power of the basic tracks recorded by the Gallagher and his band, at this time Lou Martin on keyboards, Gerry McAvoy on bass and Rod De'Ath on drums.

On the contrary, the aforementioned cuts have much greater impact with the contrast in place, while "Fuel To The Fire" is a suitably dramatic conclusion to the set. Produced by brother Donal Gallagher's son Daniel, with both his and his late uncle's blessing to remix the tracks, the depth he applies to the sound is wholly appropriate to highlight the expansion of the Irish bluesman's imagination: it takes the form of bonus cuts including "Out On The Tiles" and "Wheels Within Wheels." "Cruise On Out" is one of four selections here that would appear in more streamlined form on Photo Finish (Chrysalis,1978), the album released later in the year, as would "Shinkicker," which appears here recorded with a trio on the second disc.

By the time of this December 1979 show from The Old Waldorf, Gallagher had jettisoned the keyboards and brought in a more muscular drummer in the form of Ted McKenna. The three-piece offers no quarter during its set as it blazes though some vintage choices, such as "Do You Read Me" and "Tatoo'd Lady" from Gallagher's early solo repertoire (more than one of which, like "Do You Read Me," sound addressed directly to the attendees).

The band sounds far bigger than a trio on more than a few tracks, including "Bought And Sold," the dozen clean sounding cuts edited in quick succession to replicate the breathless pace of the shows. The mid-tempo "Calling Card" is the one respite from a kamikaze attack that concludes with a gleeful "Sea Cruise," which proceeds directly from a decidedly nasty read of "Bullfrog Blues."

The multi-fold CD booklet rests within a jewel box enclosed in a gorgeous wraparound color photo of the Frisco Bay Golden Gate panorama, inside which are facsimiles of Gallagher's handwritten lyrics to the songs on the studio set, as well as travelogue images befitting the ethos of the road warrior he was. Along with vivid graphics on both CDs, the packaging of Notes From San Francisco resides at the same high level as the music it encloses.