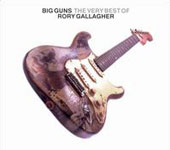 Rory Gallagher is the unsung hero of contemporary blues-rock guitar. Unlike his peers who compromised their loyalty to the genre for the sake of commercial acceptance( Eric Clapton and Jimmy Page for example) the feisty Irishman wouldn't allow any singles to be culled from his albums. In contrast to the stylistic jazz-rock leaps of Jeff Beck, Gallagher remained a steadfast devotee of flinty blues-based rock throughout his career. And unlike the shooting star that was Jimi Hendrix, even though Rory died a premature death—at 51 due to a liver ailment—his career entailed close to thirty years and over a dozen studio and live albums.

Despite the reissue of his entire catalog in the late 90's and early new millennium, plus a double-disc BBC package compiled by brother Donal (who participated in the production of the new set via Capo Records), the Rory Gallagher discography includes no legitimate authorized anthology of any sort until this recently-released two-CD deluxe package.

Ordained in colorful digi-pak with glossy graphics the detail of which is the work of the devoted fan of the man, Big Guns is the kind of set that serves equally well to introduce the novice to the strengths of Gallagher and provide a handy resource of the fan who simply wants to enjoy his deeply felt music from a different perspective (and savor the alternate takes and unreleased material here). The digital remastering of the tracks in 5.1 surround sound supplies an asset the previous reissues lacked (through no fault of the producers there---that's just how fast technology improves now to include Super Audio CD sound).

Gallagher's music was a direct and logical extension of the electrified likes of Muddy Waters when he moved from the Mississippi delta to the windy environs of Chicago. Little wonder the Irishman's participation on the blues buddha's London Sessions is some of the most prominent and empathetic. Even with his early power trio Taste (who could use some more extensive archiving themselves), represented here with a handful of tracks, the guitarist/songwriter didn't rely all that heavily on pure riffing: like the title song of this collection and "Bad Penny, the material is built on guitar figures inimitably his own.

Tough muscular progressions, such "Daughter of the Everglades, lend themselves not just to extended live improvisation, but, importantly, the artful embellishment via fills and harmonics, that make for complete studio takes which stand on their own merits

The virtues that further legitimize Gallagher's originals include a plainspoken language in the lyrics like that of "Kickback City. Never one to descend to cliché in any form, Rory instead restores the truth to common phrases such as "They Don't Make Them Like You Anymore ), Gallagher had a broad enough grasp of his roots (see 2003's Wheels Within Wheels) to include the acoustic folk textures that often decorated songs such as Leadbelly's "Out on the Western Plain with such subtlety. The electricity in his amplifiers was just a means to the end of resounding impact for Gallagher: as "Goin' to My Hometown" will attest, the real power came from Rory's own passion for what he did, whether he had a solid or hollow body instrument in his hands. Taste's "Born on the Wrong Side of Time, demonstrates how absolutely haunting Gallagher could be, while "A Million Miles Away is similarly affecting, in large part because of the clarity and detail contained in the mix of bass/drums/piano.

The inclusion of Lou Martin and his keyboards had as much (or perhaps more) to do with having another musicians to play with as add color to his group's sound (hear especially "Calling Card ), but the presence of a fourth man served both purposes; as displayed on the bass and drums workout during "Bullfrog Blues, Rory Gallagher commanded as much heartfelt commitment from his sidemen as he did from his audience.

For all the grit at his command—"an essential component of his personality—"his music contained a melodic most clearly evident in his slide playing that, as sharp-edged as it was, epitomized the bittersweet vulnerability that was on display in songs like "Shadow Play.

The antithesis of flash and celebrity, customarily dressed in flannel shirt and jeans, Rory Gallagher, stormed the stage and inhabited it as if a man possessed. And possessed he was by a devotion to the blues that perhaps has no equal among contemporary guitarists and musicians. Just short of two hours, this set of CDs is a potent antidote to celebrity superficiality as it ever was.

Visit Rory Gallagher on the web.

Tracks: CD1: Big Guns; What's Going On; Tattoo'd Lady; Bad Penny; Shadow Play; Kickback City; Bourbon; Sinner Boy; Used to Be; Goin' to My Hometown; Bullfrog Blues; Messin' With the Kid. CD2: The Loop; Born on the Wrong Side of Time; A Million Miles Away; Calling Card; Out on the Western Plain; Lonesome Highway; Just the Smile; I'm Not Awake Yet; Daughter of the Everglades; I'll Admit You're Gone; The King of Zydeco; They Don't Make Them Like You Anymore.