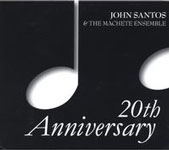 When percussionist John Santos founded the Machete Ensemble in 1985—back then it was called the Afro-Cuban Jazz Ensemble—he probably had no idea that he was creating an institution. With a difficult mission of blending jazz, folkloric, and dance idioms through an almost entirely original repertoire, and little record label support to help it find an audience, the group was lucky just to survive, despite an enthusiastic following in Oakland and San Francisco.

Twenty years on, however, Machete has not only survived, it has matured into one of the finest Latin music groups in the country. There are many bands that can mambo their asses off; many that can charm with a graceful son or challenge you with modernist twists. That Machete can do all this and more, and pull it off with such unerring poise, professionalism, and verve, is their hallmark. It is also a tribute to Santos' enduring vision and the group's collective knowledge, both of which run deep.

To celebrate their two decades of advancing the groove, the group has released 20th Anniversary, a two-disc set on Santos' own Machete Records label. Disc One contains twelve unreleased tracks recorded between 1989 and 1996, when the ensemble was larger and more dance-oriented. The second volume is made up of eleven new tunes, and features such guest artists as trumpeter/vocalist Jerry Medina and Armando Peraza on bongos.

On listening to the first disc, it doesn't take long to run into the unexpected. After an airy mambo-rumba ("Commitment ), the group takes on Coltrane's "Giant Steps. More than simply another old chestnut with a Latin rhythm stuck on (in this case a merengue), the piece is cunningly rearranged with a twisty new introduction, strong horn interaction, and tasty solos all around.

The first disc really starts to gel with "Perserverance, a gently percolating mambo dedicated to the civil rights movement — just one of several instances in which the group shows its sociopolitical roots. "Oye Mis Consejos ("Listen to My Advice ) is a Cuban-styled charanga that will put a smile on your face, and "Hacia El Amor ("Towards Love ) adds an upbeat carnaval feel with group vocals, rich percussion, and running horn dialogue.

But the true standout of this disc, if not the entire collection, is the Yoruba-inspired "Circle. Built on an organic rhythm created by batá drums, with soprano sax and flute lay down a floating, dreamlike pattern, this begins as a beautiful meditation. Trombonist Wayne Wallace then thrusts this timeless melody boldly into the present day with an innovative, extended, and apparently multi-tracked trombone solo.

On Disc Two, Machete shows a willingness to go well beyond the standard forms. There's a powerful jolt of Oakland funk in "Searchin, and flowing street poetry by spoken-word artist Rico Pabón graces two tracks. One of these, "Pequeña Amaly, ("Little Amaly ) opens a two-piece suite in memory of Santos' infant daughter, Amaly Celeste, who died in 2004. This piece is full of passion, celebrating Amaly's brief life with excellent vocals over a surging Puerto Rican plena rhythm.

As with Disc One, however, the showstopper is hidden in the middle of the set. The classic ballad "You Don't Know What Love Is is given a smoky, soulful reading by singer Destani Wolf along with some striking muted trumpet work (by special guest Ray Vega). Six minutes in, the group suddenly breaks into a chugging cha-cha. As male members of the band chant the song's title in Spanish, Vega lets loose sans mute and Wolf turns up the sass for a rousing conclusion.

Elsewhere on Disc Two, the group explores modern jazz territory in Jeff Cressman's composition "All Relative, a mysterious and cool-toned concert piece with elusive rhythms that heats up in the middle, then breaks down into an Impressionist jumble. "No Entiendo La Palabra Tener ("I Don't Understand the Words to Have ) is a shining feature for Machete's lead vocalist, Orlando Torriente, who has a warm and inviting style. "Cambia El Canal ("Change the Channel ) is a call to political action with an extended spoken- word interlude, and Wallace offers a romantic portrait of a Cuban sunset in his "Atarceder Matancero ("Matanzas Dusk ) .

As an examination of where Machete has been, where it is, and where it's going, 20th Anniversary is both a temporal landmark and a notable entry in the band's growing discography.

Visit John Santos on the web.