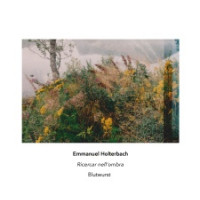 Following the runaway success of Another Timbre's five-disc Morton Feldman Piano box set, for a time (before the 2020 pandemic) the label was in the happy position of not having to worry about money. Commendably, the label's proprietor Simon Reynell decided to use the money to issue a batch of four albums by lesser-known musicians.

One of those was this release on which the seven-member Italian ensemble Blutwurst played a forty-seven minute piece "Ricercar nell'ombra (vuoto, energia, rilievo)" (" Search in the shadows [empty, energy, relief]") which was composed in 2018 by the French composer Emmanuel Holterbach in collaboration with the ensemble, the two having come together out of mutual respect. As Holterbach has said, "They loved my work, I loved their work. So, make a choice: become friends or work together. We actually did both. Blutwurst are based in the beautiful city of Florence and this is where we were able to start work together during a three-week residency back in May 2018." Although neither the composer nor the ensemble was an immediately recognisable household name, not too long after this album's release Reynell posted on Facebook, "I've already had to order a re-pressing of this one because it's selling much faster than I expected. (It's annoying that I get these things wrong so often.)"

So, what was it about this music which made it sell like hot cakes? Starting with the ensemble, it features viola, trumpet, double bass, accordion, cello, bass clarinet and harmonium, which is the kind of eclectic line-up that will be recognisable to aficionados of Another Timbre favourite, Marcus Granberg, and one which seems tailor-made to produce mellow soundscapes of slowly-evolving sustained notes. And so it is here; even commonplace jazz instruments such as trumpet and double bass—through sustained breath and bowing, respectively—produce long smooth notes which blend in perfectly with the others, never sounding remotely anomalous, more like ideal ingredients.

In Maurizio Costantini's capable hands, the bass provides a constantly evolving rock-solid foundation to underpin everything else; the fact that the bass can be heard separately distinguishes it from the other six instruments which tend to rise and fall together, blending into one many-faceted sound. That rising and falling distinguishes this composition from a drone, but does not generate anything that could be called a melody. Instead, the music has an ambient quality, meaning that it can be present in a space, creating a pleasant, relaxed mood or atmosphere, without having to be the centre of listeners' attention. Nonetheless, if it is given undivided attention, it reveals more and more features and details; it can be heard again and again and keep on giving. The piece's forty-seven-minute duration seems arbitrary; this music can be repeated indefinitely.