BY DOUG COLLETTE
December 3, 2017
Sign in to view read count 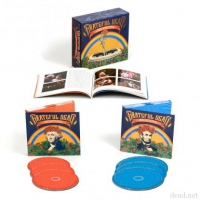 Not nearly the rare or expansive likes of Get Shown The Light (Grateful Dead/Rhino, 2017), including the vaunted Cornell '77 concert, The Grateful Dead's RFK Stadium 1989 Box is nevertheless a deceptively lavish box set (note the gold foil adorning the band's moniker on the front cover). Perhaps because it is now one of a string of titles documenting in both audio and video the collective strength and consistency of the band during this period of their history—Truckin' Up to Buffalo (Rhino, 2005) and Crimson White & Indigo (Rhino, 2010) most conspicuously among them—the lightweight cardboard box enclosing the similarly formatted three-CD set was deemed proportionate to the rarity of the content.

As was the decision not to include DVD here as with those aforementioned titles. Cynics might snipe that such content, from which work of Len Dell'Amico comes the array of vivid photographs juxtaposed in the accompanying booklet with Dean Budnick's play-by-play essay, was essentially relegated to marketing tools via the annual 'Grateful Dead Meet Up at the Movies' theater broadcasts of 2016 and 2017.

But the fact of the matter is that the two performances that comprise this package deserve to stand on their own terms as final evidence of this tour as part of the last thoroughly stellar string of concerts the Grateful Dead offered before a variety of extenuating circumstances impeded the climb to such heights as contained here. The July 12 show was the 'Meet Up' feature this summer, the hearing of which reaffirms the overall positive impression left via the concert film. Grateful Dead archivist David Lemieux notes this summer tour as an early stage of a protracted period of consistently superior performances and it's hard to argue otherwise, especially if you've seen and heard the aforementioned or 2016's 'Meet Up" showing the stop at the old Sullivan Stadium in Boston.

With energy to spare on vocals even late in the set around "Eyes of the World," Jerry Garcia exhibited no lack of ideas for solos like the one that cuts a swath through "I Need A Miracle." And his exchanges with Brent Mydland-the two might well have been positioned next to each other on stage at Jerry's request-are only slightly less of a revelation than the titular leader of this band even if you're conversant with how deeply the keyboardist/vocalist inspired the Dead in the decade he was a member; the impassioned likes of his vocal delivery on an original like "Far From Me" is no less impressive than that on "Good Lovin,'" or his piano and (especially) organ, as on the latter.

The 'Space' segment that followed was far less evocative than the more spontaneous improvisations involving the whole group. The one that arose during a deliciously slow version of "Friend of the Devil" was exactly just such an instance, largely because the lead guitarist instantly picked up on the opening for a transition and led the ensuing jam. And speaking of inclusivity, Bruce Hornsby's sit-ins on accordion, but even more so a seemingly impromptu turn on the piano during "Man Smart, Woman Smarter," tickled Garcia no end.

Although there's no appreciable difference in the high quality of the two performances, the two completely different setlists constitute a reminder of the broad template for concerts the Dead set which continues into much of today's contemporary rock, specifically in the realm of jambands. There's an abiding unity and depth permeating shows like 7/13, solidified no doubt by the level of engagement and delight evinced by the Grateful Dead's titular leader: it is infectious, in fact, it serves to help elevate the overall atmosphere at the Washington D.C stadium so both performer and audience can transcend the inclement weather, thunder and rain of which is readily audible here during, appropriately enough, on rhythm guitarist Bob Weir's "Looks Like Rain.."

One of the conspicuous similarities between the two shows, hearing the expanse of material alone is admirable especially (even?) in a year when the group had resuscitated so many venerable chestnuts such as "Attics of My Life" and utilized MIDI technology to refresh the likes of "The Other One." The variety is all the more striking when, even sans a spotlight from Lesh as the night before (on Bob Dylan's "Just Like Tom Thumb's Blues), it's led in turn by Bob Weir ("Hell In A Bucket"), Garcia ("Cold Rain and Snow") and Mydland ("To Lay Me Down").

And while the intervals of "Drums" and "Space" were a given in the group's live offerings, the respective entries and exits invariably put those segments in different light(s) from night to night: moving in from "Terrapin Station" is a markedly different experience than from "Eyes of the World" (itself a denouement of sorts), while egress to "I Will Take You Home" is utterly different than to "I Need A Miracle."

Nor are such nuances merely musical semantics, but vivid illustrations of the mechanics in this musicianship that remains so distinctive after nigh-on three decades. There's no question the perfectly-proportioned mix of John Cutler's recording, equally broad in scope and deep in range, renders the experience virtually real-time, but the crystalline quality of sound in such limited edition packages is just another integral aspect of its attraction, idiomatic too of this band's perpetual attention to the importance of audio.

The RFK Stadium 1989 Box is a sterling reminder not just of how fascinating is the history of the Grateful Dead, but how even the most deliberately discerning snapshots are enlightening far out of proportion to the relative size of the package in question.