By DAN MCCLENAGHAN
July 6, 2010
Sign in to view read count 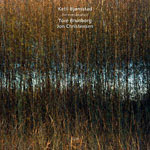 The disc is called Remembrance, but it could just as well have been tagged "Prayers" or "Hymns," or "The Search for Peace and Tranquility," words that seems a fit with the music of Norwegian pianist Ketil Bjørnstad.

Bjørnstad began his sojourn at ECM Records with Water Stories in 1993. In his eight recordings for the label since then, he has played often with string men, including cellist David Darling and guitarist Terje Rypdal, but this time out he enlists fellow Norwegian, saxophonist Tore Brunborg. Drummer Jon Christensen, who has a near-forty year musical relationship with Bjørnstad—rounds out the trio.

For those wondering what the famed ECM Records esthetic sounds like, this is it: cool, spacious, unhurried, unfailingly lovely, and often quite solemn; like something that would sound good in a house of worship, under shimmer and flash of the luminescent pastels of the Northern Lights.

Melodies sound like lullabies, with Brunborg's tenor sax blowing round and hollow notes, while Bjørnstad dabbles in bright colors in the background, and Christensen percusses with a wonderful off-kilter unpredictability that no one, with the exception of Paul Motian, can match.

Indeed, a comparison can be made between Remembrance and Motian's own Lost in a Dream (ECM Records, 2010). Both discs sport the same instrumentation, with Motian employing two fellow Americans; saxophonist Chris Potter and pianist Jason Moran. Both discs explore exceptional and intricate vistas, but Bjørnstad and his Scandinavian compatriots delve into more diaphanous landscapes, where things aren't quite so well-defined.

The individual tunes are tagged simply with the Roman numerals I through XI. They have a suite-like continuity and a rich and reverent gorgeousness, on this outstanding set by the Norwegian pianist and his trio mates.