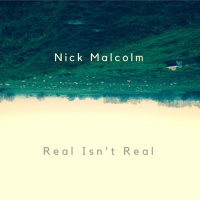 There's always a temptation to describe things we like as "the real jazz/soul/music..." out of a passion for a new musical discovery, but what does it actually mean? At the level of pure pedantry no piece of music can be more "real" than any other, yet what this unfortunate formulation is meant to signify is that the mother-lode of the inescapable quintessence of a particular type of music, the right stuff, has been found—the cat's pyjama's, the dog's (ahem) 'cojones' even—well you get the picture. Nick Malcolm's concerns are rather broader than the confusions of our critical language on this excellent new album, but the composer, improviser and trumpeter fully deserves to find an enthusiastic audience prepared to spout hyperbole in whatever terms they desire.

Real Isn't Real is an album that is hard to pin down to one style, yet it still feels like a unified whole because the 4 songs are surrounded by 5 "Spiral" pieces that reflect upon the preceding musical material through improvisation. So the first song "Floating Earth" features jazz vocalist and long term Malcolm collaborator Emily Wright who provides a lovely gentle vocal alongside Malcolm's tasteful trumpet accents. The piece slips into the companion "Spiral II—Encircle" driven by the interaction of Olie Brice's bass, Alexander Hawkins piano and Ric Yarborough's percussion until there is an abrupt segue into William Harris' 'talking' bass line and the soulful horn stabs of "Silent Grace." Here Marie Lister's vocal points us in the direction of what we once called 'nu soul' as exemplified by the likes of early Erykah Badu. If you like a little soul with your jazz, or indeed vice versa, this and the companion "Spiral III—Ascend" could be very much to your taste.

The style shifts towards folk on "Grass Remembers" where Josienne Clarke sings words from WB Yeats poem "Memory" over music composed by Malcolm to haunting effect. "Spiral IV—Blues" begins with Clarke reading the short Yeats poem before a strong bass line emerges with Malcolm's trumpet echoing the melody. Yarborough's drumming is terrific here, setting Hawkins up for a near apocalyptic solo that abruptly segues into the next track. It feels as if the band is saying—we can cope with any style of music and still produce top quality improvisation.

Perhaps the best known of the guest vocalists is the last, Lauren Kinsella of Blue-Eyed Hawk and Snowpoet fame. Here the instrumentation is initially sparse, giving space to Kinsella's meditation on the nature of reality, before Hawkins sets up Malcolm for a show stopping solo section under which Kinsella appears to talk in tongues like Mary Margaret O'Hara. The switch to the fifth "Spiral" improvisation, entitled "Dissolve," is signalled by Hawkins' descending piano line that develops into a choral epilogue dissolving, as the title suggests, into an electronic montage.

The overall effect is of an album that moves through styles fluidly, the transitions between component songs being expertly handled by the seamless linking improvisations. Left alone the songs might conceivably feel fragmented, yet by adding the "Spiral" pieces Malcolm spins a sound story that makes it all cohere. Whether the composer intends to make a point about the way we define our subjective perceptions of reality through the stories we tell ourselves about our experiences is not clear, but its ultimately up to each of us to come to terms with our own reality. Whatever the composer's intention, this is an album that fascinates and entertains in equal measure, repaying repeated listens, just please don't call it 'real music.' Highly recommended.