By WOODROW WILKINS
March 2, 2008
Sign in to view read count 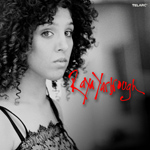 In an age when even some of the most firmly established veteran artists are releasing albums of cover songs—whether the tried and true selection of standards from the Great American Songbook, or updates of more recent popular tunes—it is quite refreshing to hear a debut artist sing mostly original songs. Raya Yarbrough, a West Coast product of a mixed-race relationship and mixed musical influences, penned eight of the 12 songs on her self-titled release.

Yarbrough was seven when her musician father, Martin Yarbrough, took her into the nightclub scene, where she began performing jazz for diverse and often difficult crowds. Now in her twenties; she has opened for trumpeter Terence Blanchard, been featured at events sponsored by the Thelonius Monk Institute and performed at the Playboy Jazz Festival. Some of her original songs have been featured on television shows, including Girlfriends and Battlestar Galactica.

Her eponymous release, produced by Steve Bartek, formerly of Oingo Boingo, presents a snapshot of Yarbrough's diverse influences, mixing pop, jazz, Latin and R&B. She sings, plays acoustic guitar and piano and arranged all but one song. One of her arrangements is a very different rendition of trumpeter Clifford Brown's "Joy Spring." This melancholy take, employs a small string ensemble as well as the use of loops, but still gets the message across.

One of the more delightful pieces is her treatment of "Dreamer's Ball" by the British rock group, Queen. Yarbrough is complemented by her father on background vocal, with Takeshi Akimoto performing the guitar solo. Yarbrough's voice is soulful and sassy as she takes this easygoing track through its paces. Katisse Buckingham, who plays saxophones and flutes on other tracks, performs the flute solo on Yarbrough's original, "Sorrow's Eyes." One of the longer tracks on the album, this song is lightly accented by pianist John Kirby, drummer Nate Wood and bassist Kaveh Rastegar, who all form the core of Yarbrough's background throughout the album. Yarbrough's voice and the alto flute seem to merge at times.

"Listen, Emily," may be the most powerful of Yarbrough's original songs. A song she wrote for a student who was having a bad day. An anthem for encouraging teenage girls not to allow typical problems weigh them down, things they'll put into perspective later in life, Yarbrough sings it with deep passion. Though mellow at times, she wails as she says, "And I swear, you're already above this." It's sure to give listeners chills. Akimoto adds a stirring electric guitar solo.

Some of Yarbrough's songs were written recently while others were penned as far back as high school. Raya Yarbrough presents her first successful attempt at getting them recorded. Not wanting to be pigeonholed as jazz or pop, she simply wants to be known as a songwriter and musician. Her recording debut is evidence that she's good at both.