By CHRIS MOSEY
November 5, 2018
Sign in to view read count 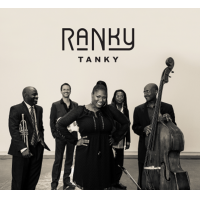 Ranky Tanky are based in Charleston, South Carolina. They specialize in jazz-and blues-influenced arrangements of the traditional music of the Gullah people, who came from West Africa as slaves in the 19th century. They were brought to South Carolina's Low Country and Sea Islands to work on plantations where their knowledge of rice cultivation could be put to good use and where high humidity and mosquitoes made life unbearable for whites and blacks from elsewhere in Africa. Best-known descendant of the Gullahs is former U.S. First Lady Michelle Obama.

Vocalist Quiana Parler previously worked as a solo entertainer and was one of the most sought-after acts in South Carolina. The other members of Ranky Tanky—Quentin Baxter, Kevin Hamilton, Clay Ross, and Charlton Singleton—played together in the Charleston jazz band The Gradual Lean in the late 1990s. Put the two acts together and you have one of the most innovative and authentic blues-based bands it's possible to find.

The album kicks off with the jazzy gospel number "That's Alright," Parler's superb vocal backed by Charlton Singleton's minimalist but highly sensitive trumpet. "Been In The Storm" last saw light of day in a souped-up soul arrangement by The Mighty Clouds Of Joy on their 1979 album Changing Times (CBS). It's instructive to compare it with Ranky Tanky's less flashy but far more feeling version.

"Oh Death" was featured in the Cohen Brothers' movie, Oh Brother Where Art Thou. Parler continues to be in fine form, backed by some more of that sensitive trumpet from Singleton and with just a touch of laid-back guitar from Ross, the band's only white member. He's back with more on the title track, "Ranky Tanky."

"You Gotta Move" was one of the numbers Fred McDowell sang back in the 1950s, accompanied by his own spine-tingling slide guitar, for folklorist Alan Lomax, who was on a field trip to the South recording blues. The song was later taken up by Cassandra Wilson. "Join The Band" was regularly featured acapella by another, very different slide master, Lowell George, with his band Little Feat.

The promise of a better life after death was what attracted the enslaved Gullahs to Christianity. This promise, contrasting with the brutality of their daily life, gave their music an underlying feeling of hope fighting with despair. This feeling is still there in Ranky Tanky's music. Its sincerity shines through and if it makes you tap your feet or clap your hands, then That's all right.