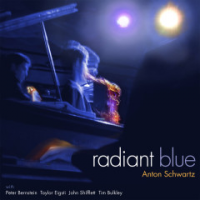 For a guy who has the blues, San Francisco-based tenor saxophonist Anton Schwartz sure seems happy. While the ten tracks on Radiant Blue are purported to be based on the twelve-measure blues form (I think there's a couple of sixteens in there), there is barely a blush of sadness to this decidedly upbeat release. But once you're a few measures into "Phantom Dance," you can forget about the overarching theme and just enjoy the ride. This modal opener presents Schwartz's confident tone and the luxury-class support of pianist Taylor Eigsti and guitarist Peter Bernstein. Together with the rhythm section, the soloists conduct a fluid give and take that works, whether they are tackling a straight-ahead tune or a funky groove.

Eigsti's cascading runs are truly exhilarating to hear, as is his precise execution. His quicksilver solo on "Slightly Off Course and his turnbacks on "Marcel Marceau are carried off so effortlessly that it's almost intimidating. Bernstein is brilliant throughout; enough so that one wonders if these compositions would fall apart if his cool tones and sensitive phrasing weren't present. Whether playing in unison with Schwartz or carving off a slice of the blues on "Blues For Now, his guitar gives this group's sound the muscle it requires.

There's no doubt that with running mates like Eigsti and Bernstein, Anton Schwartz's own playing can be overshadowed, particularly on the first listen. But subsequent listenings reveal a smart improviser, a player who imbues his songs with genuine emotion, and a tenor sound not unlike that of Jimmy Heath on his later recordings. Schwartz's finest moment is his carefully calibrated soloing and occasional dives into the lower register throughout "Life & Times, a poignant song with descending chords that captures the passage of time with, dare I say, radiant joy.

I don't think the jazz world needs another cover of Jobim's "Wave, but if you must hear it again, you might as well hear it played well. Otherwise, Radiant Blue is an excellent straight-ahead jazz release featuring young players with talent to spare.