By Jerome Wilson
February 6, 2020
Sign in to view read count 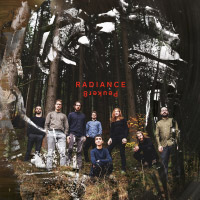 Peuker8, led by guitarist Paul Peuker, is an ensemble which combines the instrumentation of a small jazz group with a string quartet. This makes for a varied sound palette which takes in jazz, rock and classical concepts.

The music on this CD starts as a pleasant, light mixture of guitar and strings on "Radiance I," then immediately becomes more complex on "Radiance II" as guitar, piano and drums combine on an angular progressive rock riff further toughened by the strings and Mark Weschenfelder's spiraling saxophone. "Rage Against The Plastic Waste" is an even headier stew of full-on King Crimson-style jazz-rock with Weschenfelder and Peuker crashing against each other as the drums roll and storm, and the strings add a layer of urgency. "Onto the Bright Wild Future" is more formally arranged, with pizzicato and arco string notes decorating Marius Moritz 's lumbering piano chords while Peuker and Weschenfelder play flowing merged sax and guitar lines reminiscent of the Allman Brothers. The group creates a big, dense sound on most tracks and Florian Lauer 's forceful drumming keeps it focused.

"The Core" is even more intense; it piles together sawing strings, heavy piano and menacing guitar and, as the cherry on top, adds the powerful operatic baritone of Konstantin Ingenpass. The resultant imposing sound approaches the majesty of the French art-rock group Magma. Ingenpass also lends his voice to the lighter "Requiem" which is a mournful piece with traces of Gustav Mahler. Here, his singing is more plaintive, rising against stately piano and soothing strings and clarinet before Peuker comes in with thick, soothing rock guitar in the manner of Terje Rypdal or Pink Floyd's David Gilmour. The set ends in a quiet and reflective manner on "Sage (Against The Plastic Taste)," with Peuker quietly strumming against clarinet, sliding strings and piano notes that tinkle like raindrops.

Paul Peuker has assembled a chamber group which combines classical gravity, rock force and jazz experimentation into a strong and lyrical sound, a synthesis which brings something new out of its component parts.

Radiance I; Radiance II; Rage Against the Plastic Waste; Framework I; The Core; A Sorrowful Song; Framework II; Onto the Wild Bright Future; Requiem (Radiance III); Is This The End?; Sage (Against The Plastic Taste).