By DOUGLAS PAYNE
February 1, 1997
Sign in to view read count 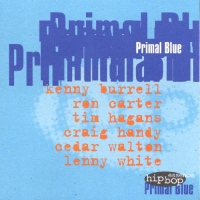 Drummer Lenny White never shortchanges his listeners on star talent—or tremendous musical combinations. Here, he nominally leads a dream band featuring guitarist Kenny Burrell (who, by virtue of the alphabet, gets first billing), pianist Cedar Walton, bassist Ron Carter, trumpeter Tim Hagans and reedman Craig Handy. This set of easy, relaxed blues seems, at first listen, predictable and as programmatic as White's other Hip Bop all-star aggregates (Essence of Funk with Tom Browne and Benny Maupin and Afro Cubano Chant with Gato Barbieri and Bob James). But in this age of fifteen-dollar disks, there is something very rewarding about a group of great musicians getting together and making music that is so rich with the joy of playing together and enjoyable to the listener.

The genre is a natural for the guitarist (remember Midnight Blue?) and the bassist. But each player, including the very talented horn players, excels in this environment. This is Cedar Walton and Kenny Burrell's first teaming since the guitarist's 1991 disk, Sunup to Sundown, on Contemporary—and it's great to hear them together again. Ron Carter, as expected, has played with all these guys before. His talents are significant in blending the group in a warm, focused unity. White features Carter prominently throughout (as he does on other Hip Bop discs like Tom Browne's refreshing Another Shade of Browne) and most memorably here on John Coltrane's "Bass Blues" (originally from the 1957 album Traneing In). Every track works well, but standouts include White's "Uno Dos Adios," Burrell's "Primal Blue," Walton's ode to his mother, "Dear Ruth" and Carter's "For Toddlers Only."

One has trouble imagining how Lenny White can afford to continue gathering such talented friends together to make such a wide variety of stimulating genre jazz (remember his excellent Acoustic Masters series on Atlantic Jazz a few years back featuring Charles Lloyd and Bobby Hutcherson?). But here's hoping, through his Hip Bop label, he is able to continue. Recommended.