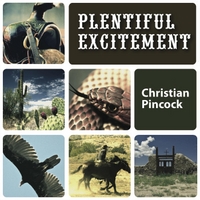 Here's an unusual combination: valve trombone, piano, drums and tuba (no bass). The leader, Christian Pincock, was until recently a teacher at the University of New Mexico and member of the Albuquerque Jazz Orchestra, and Plentiful Excitement was recorded in Santa Fe shortly before he left New Mexico to explore greener pastures in the Great Northwest (Washington state, to be precise). Pincock is a splendid player, and there is excitement here, although "plentiful" is clearly a matter of opinion and personal taste.

Besides manning the front line, Pincock wrote and arranged all of the half-dozen songs, which are by and large plain-spoken and pleasing to the ear. To change things up a bit, Pincock uses mutes (of varying form) on the graceful "Song for Deian" and the unhurried, gospel-accented "Virtual Religion." Otherwise, his earnest and resonant open valve trombone takes the lead, soloing brightly on "Plentiful Excitement," "Entertaining Company," "Lily Bakes a Pie" and the Bob Brookmeyer-like finale, "Sole Representative."

There are, in fact, tangible echoes of Brookmeyer (one of Pincock's mentors at the New England Conservatory) throughout the session, as might be expected from any contemporary valve trombonist who has kept his ears open. There are in fact few other valve trombonists with whom to make a comparison; Rob McConnell, Bob Enevoldsen and Stu Williamson are names that spring to mind. Pincock, for his part, definitely leans toward Brookmeyer, with perhaps a trace or two of the others emerging from time to time. As for his companions, Muller is a splendid soloist / accompanist (on a less-than-perfect piano), while Weaver and Compton keep admirable time without stepping on Pincock's toes and Weaver adds the occasional low-register solo.

In sum, a remarkably polished session by four musicians whose names and stature are virtually unknown beyond their proximate habitat. On the downside, the album runs for only forty-six minutes, rather modest by today's standards. Even so, almost none of that time is unrewarding, which is more than can be said for some other recordings whose playing time is appreciably longer.