Wayne Bergeron: Plays Well with Others 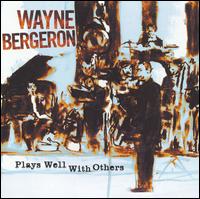 The "report card on trumpeter Wayne Bergeron is accurate—he definitely Plays Well with Others. While that alone would be enough to endorse Bergeron's second album as leader of his own big band, it is only one aspect of a superlative studio date on which the "others include a number of the Los Angeles area's busiest and most talented studio musicians and sidemen.

The ensemble is sharp and congenial, the charts amiable and inventive, the soloists resourceful and impressive. And to ice the cake, there's a guest appearance by Bergeron's idol and role model, the incomparable Maynard Ferguson, who jousts earnestly with the leader on Gordon Goodwin's playful "Maynard and Waynard. It's no accident that Bergeron's nickname is Waynard, as he is the heir-apparent to Ferguson, the undisputed "Monarch of the High C's for more than half a century before his passing in August '06.

Bergeron validates his high-note credentials immediately on pianist Wally Minko's tenaciously rhythmic "Endless Torture and either solos or plays lead on each of the album's other nine tracks. But he goes the extra mile not to hog the show, earmarking ample solo space for the "others including alto Dan Higgins ("Torture, "Scheherazade, piccolo on Geoff Stradling's "Samba Brassiliero, clarinet on his urbane composition, "The Hipster ), trombonist Andy Martin ("Torture, "Georgia ), tenors Pete Christlieb ("You Go to My Head, "Samba Brassiliero ), Bob Sheppard (Joey Sellers' "Requiems ) and Bill Liston ("You Hid What in the Sousaphone? ), pianist Christian Jacob ("Scheherazade, "Samba Brassiliero"), trumpeter Warren Luening ("Georgia ) and Bill Reichenbach (tuba on "You Hid What?, bass trombone on Tom Kubis' cleverly prescient "High Clouds and a Good Chance of Wayne ).

Kubis arranged "You Go to My Head, on which Bergeron trades trumpet for flugelhorn to show he can play gracefully as well as high (as in upper register, not stoned) before nailing some incredible screamers at the end. Liston's dynamic arrangement of "Georgia is a highlight, as is his whimsical "You Hid What? But why dwell on highlights when every number warrants an identical appraisal. This is quite simply a marvelous album from start to finish, and no more need be said. The proof is readily available for everyone to hear.

Endless Torture; Maynard & Waynard; Scheherazade; You Go to My Head; Georgia; Samba Brassiliero; High Clouds and a Good Chance of Wayne; Requiems; You Hid What in the Sousaphone?; The Hipster.