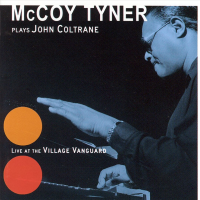 First off, for those who might assume this record was some never-before released Tyner Impulse record from the 60s—please calm down...it's actually a Tyner record of the recent era when he recorded for Impulse, evidently residue from the contract he was under before having moved onto Telarc.

So-not the Tyner of such memorable records as Today and Tommorrow or Inception, not that classic 60s Impulse recorded sound, but...a good record nonetheless and one that has its own certain value both in the Tyner discography and in the realm of Trane tribute records.

This live set from the Village Vanguard was recorded in 1997 on John Coltrane's 71st birthday (the fact we are now in the annum of his 75th birthday makes it all the more timely). Tyner is accompanied here by the excellent bassist, George Mraz, and the spunky rhthymic force of Al Foster on drums. Both players have been part of the McCoy Tyner trio in recent years as Tyner has branched out from having only longtime associates Avery Sharpe and Aaron Scott in his trio. Foster, in fact, was featured on a recent Telarc trio record along with the bassist Stanley Clarke.

These trio mates serve McCoy Tyner well, indeed, better than Sharpe and Scott do but that's no major revelation; people have observed for years that Tyner's trio didn't exactly feature musicians on his same footing. In any event, what the gains are made are obvious in terms of musicianship. Mraz is inobtrusive and respectful of McCoy's own volume level, providing uncomplicated but solid basslines, while Al Foster is simply exemplary in the way that he will constantly stir up bluster but never overwhelm. Generally speaking then-these musicians stay out of Tyner's way and only do what is needed to accentuate his playing. There's a certain conservatism here, but Tyner's former trio, in contrast, often had the feeling of a rock act because the three musicians tended to move less as a unit, more as one soloist after another.

The trio's program of tunes and compositions made famous by Trane is well-rounded but there's nothing faintly offbeat in terms of tune selection. "Mr Day," also know as "Ug 'Gainst the Wall" is the closest thing, as a rather southern-sounding blues penned by Trane.

Nevertheless, the classic Trane repertoire is well-represented here with thoughtful, stately renditions of "Naima," "I Want to Talk About You," and "After the Rain." A case could be made that the set is too ballad-heavy, but then you realize one isn't in real position to argue with how Tyner wants to honor Trane, his old boss. "Crescent" and "Afro Blue" are the two cuts which feature the McCoy Tyner many think of-driving, banging fifths in the left hand, and sideways right-hand work that sounds at somewhere around Mach 5. That said, "Afro Blue" is probably the choice cut on the record; great Mraz solo, and dramatic build-ups here. "Mr Day" aka "Up Against the Wall"-is fine for its chordal dynamism-we see here clearly why McCoy's left hand is the envy of so many jazz pianists. Finally-"Moment's Notice" stands as the only track that seems somewhat insubstantial.

Overall, this set is a good representative of late-period Tyner—some feel that is a qualification in itself; however to longtime Tyner fans who still appreciate his work, or to those new to this dramatic style of jazz piano, this record should provide some decent listening. It's not essential as a Trane tribute record (as Impulse(Verve) has tried to market it)-though. There are much more important Trane tribute records out there, including several that McCoy has been involved with himself.