By John Dworkin
November 20, 2008
Sign in to view read count 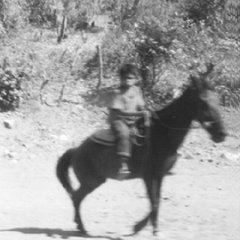 After listening through Pillars And Tongues' Protection, the listener may be left with the feeling of having attended a new style, post-religion Mass with liturgical forms composed by Tom Waits, John Fahey and Arvo Part. Old rituals are transformed and making art replaces the act of prayer. In fact, Protection was performed at South Union Arts (Gethsemane Baptist)—an old church in Chicago converted into an art space. It's a beautiful recording and an original approach to collective improvisation.

Evan Hydzik, Elizabeth Remis and Mark Trecka are the core of Pillars And Tongues, and have been developing an intuitive musical relationship for a decade; their main instruments are double bass, violin, and drums—and all of them sing. Protection also features many other auxiliary instruments: percussion, flute, mellophone, melodica, harmonica, and bass clarinet. This unusual and quirky array of instruments may seem arbitrary at first glance; or worse, merely calculated as an oddity. But the album's rare hypnotic charms make it obvious that much care was taken in their choosing.

After the short opening drone of "Hall Of Bliss," which acts as a kind of overture and initial introduction of characters, the remaining three sprawling, loosely structured explorations begin. Each runs just over 14 minutes. They're distinct but share some overarching characteristics: each contains written and free sections; parts are allowed sufficient time to generate certain atmospheres; minimalism (not in the formal sense); shared tonic areas; ostinatos; and a seemingly deconstructionist attitude toward language.

"Dead Sings" plays like newly discovered Alan Lomax folk and blues field recordings of ghosts. It starts with Hydzik's earthy, straightforward pentatonic bass ostinato with the occasional slap. His upright tone is warm and big and his time is solid. Clanging, chain gang-like percussion enters with a lowdown and loose Bob Dylan or Captain Beefheart-esque folk/blues harmonica. Then come the poetic and impenetrably cryptic lyrics. The vocal is pitched but in between being spoken and sung. This mirrors the lyric's meanings not being pinned down. These elements combine forming a modern beatnik post-blues wail.

The second section of "Dead Sings" is a short collective improvisation over the ostinato. It's the loudest, most rock-like portion of the recording and functions as a set-up for the quiet and protracted eight minute long rubato fadeout that follows. If this fade were written out and given to other musicians to sight read, they'd likely look at it and murmur, "Where is the music?" It drifts into a floating, minimalist haze: static, pulsing organ chords, occasional soft bass clarinet long tones, artificial harmonics from the strings and unorthodox bowing. Remis is particularly creative here, delicately striking her bow to the violin like hammers on a dulcimer. The music acts as a sailboat heading toward an unreachable horizon disappearing into the sun.

The investment of time is essential in creating the atmosphere/effect produced by this music. Pillars And Tongues are acutely aware of how time affects perception. While the music is mainly improvised around a few pre-established signposts, the lengths spent between seem generally agreed upon. Listening to a single note for four beats at medium tempo has a very different effect on the listener than hearing that same note for ten minutes. It's similar to the effect of staring at your face in the mirror for an extended period. Your face may begin to shift and morph. Or repeating a single ordinary word aloud over and over continuously for five minutes can eventually make the word sound foreign or strange. It's transformative.

"Protection (I)" opens with three short duets: strings, winds, then voices. The string duet is slow, stately and written. Its repeated ascending line, resignation, and use of a Picardy third of sorts are reminiscent of the main themes in Thomas Newman's Shawshank Redemption film score. This gives way to an improvised duet between the bass clarinet and flute. Then a vocal duet begins the heart of the piece. The two voices chant monastic incantations of a major third for three minutes. A third voice enters bringing the perfect fifth—completing the triad for another two minutes. This chanting is underscored by improvised cymbals, bells and chimes. Another collective improvisation follows the chant and then the opening section briefly closes the piece.

"Protection (I)" recalls Arvo Part's concept of tintinnabulation: "I have the certain feeling that everything outside this one thing has no meaning. The complex only confuses me...and I must search for unity. What is...this one thing? Traces of this perfect thing appear in many guises...Tintinnabulation is like this. I build with the most primitive materials—with the triad, with one specific tonality. The three notes of a triad are like bells. And that is why I call it tintinnabulation."

"Protection (II)" closes the album with another protracted fadeout beginning with the words, "There is no word that means both to be and to be free. O come ye. O come ye." Pillars And Tongues may be as much about ideas as they are about music—though this is very beautiful music. The closing free sounds of the shakers, bells or assorted percussion, fluttering violin and flute lines, and the static/shimmering organ chords, create the sensation of an infinite suspension—an eternal unexplained hovering. Those who enter and let go may become like children in gym class huddled beneath the illuminated waves of a floating parachute gazing upward in collective wonderment.

About Pillars And Tongues