By GLENN ASTARITA
November 17, 2016
Sign in to view read count 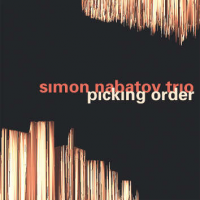 Simon Nabatov is a renowned improvising jazz pianist who possesses a hefty discography on Leo Records as a leader and session artist. At times his mode of execution summons a perspective of several tentacles flailing across the keyboard via a cavalcade of intriguing perspectives and much more. But with his Cologne-based trio, Nabatov renders a shift in strategy by leaning more towards conventional song-form initiatives. And from a holistic view, the band's output is often astonishing.

The trio unfolds a manifold perspective, yet this is not boilerplate piano trio fare. Here, the musicians generate gobs of contrasts while interrogating each other's spur-of-the-moment ideas along with crashing cadenzas and succinct melodies. And while the improvisational element remains intact, Nabatov also hones in on trance-like movements while dishing out introspective moments and vividly merging classical, jazz and avant-garde persuasions into the mix. The pianist bridges the gap by transforming old school jazz values into his futuristic vision. With moments of bravado and the artists briskly performed unison choruses, they turn up the heat and throttle matters down to a whisper during various passages.

" Picking Order" is a cascading, rhythmic wonderland. However, "Growing a Soul Patch" is driven by an endearing hook, redesigned by the leader's up-tempo inner-workings along with harmonious block chords and colorific shadings. Moving forward, they bump it up into a staggered rock groove, amped by brief sojourns into the R&B world. Nabatov juxtaposes the structured works on the unbounded, experimental piece, "Turning Point."

The trio pulls out the proverbial stops on "It's a Given," marked by a gorgeous primary theme, abetted by the pianist's Tatum-like runs and a few curveballs tossed in for good measure. In addition, the musicians engage in buoyant conversations, while smashing the main plot into smithereens for the opus. In sum, Picking Order is a progressive jazz music marvel and a top-pick for 2016, or any year for that matter.