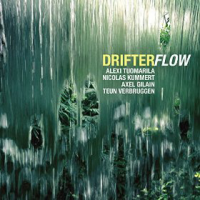 Drifter started life as the Alexi Tuomarila Quartet, a band that was beginning to develop a reputation on the European jazz scene with its second album, 02 (Warner Jazz, 2003). Unfortunately, the label's parent company dropped its jazz list, leaving the quartet without a contract shortly after the album's release. Tuomarila carried on--releasing a trio album, joining Polish trumpet legend Tomasz Stanko's Quintet and working across Europe in numerous ensembles. A decade later, the UK independent Edition Records ...