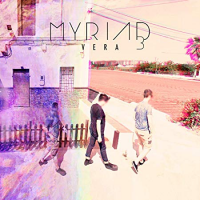 The number of contemporary jazz piano trios that take their inspiration from non-jazz sources seems to grow all the time. To a list that includes The Bad Plus, Phronesis, and E.S.T. add the Canadian group Myriad3 which draws from concepts in classical music and progressive rock. They often begin their pieces with one repeated figure and spin hypnotic webs of variations and countermelodies from there. Their style can produce works of singular beauty. On “Diamond," a quiet piano ...

Vera, the fourth album from the Toronto-based trio collective Myriad3, is a fascinating example of how fastidious design principles and shrewdly executed extemporization can truly complement and even counterpoise one another. There's serious attention to detail in each of these ten pieces, but the music benefits greatly from its embrace of uncertainties and creative expression(s). Opening with pianist Chris Donnelly's “Pluie Lyonnaise," Myriad3 immediately taps into a minimalist stream with a maximalist mindset. Characterized by hypnotic tides ... 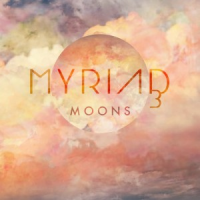 Myriad3's third release, Moons follows very much in the vein of their first two, Tell (Alma Records, 2012) and The Where (Alma Records, 2014), yet there are subtle differences both in instrumentation and their approach to their material. In short, a lot of growth is evident when one compares Moons to its predecessors. Tell, recorded a scant 2 years after the trio's formation, is essentially a virtuosic acoustic jazz album: three young cats flexing their well-developed chops. The thing that ...

Someone's always trying to take a tried and true format out on a new tangent. Consider the piano trio: Bill Evans introduced deep, classically-influenced harmonics and a democracy of instrumental input in the late fifties and early sixties. The Esbjorn Svennson Trio (e.s.t.) brought in classical, rock, pop and techno elements; The Bad Plus plays with avant-garde jazz and pop/rock influences, and they can be loud. Even the tried and true changes. It's all good; and some of it is ... 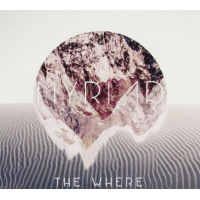 Myriad3--the Toronto-based trio of pianist Chris Donnelly, bassist Dan Fortin, and drummer Ernesto Cervini--may be the most noteworthy small group to emerge from Canada in years. Tell (Alma, 2013) introduced the band to the world, marking Myriad3 as an outfit with a post-modern outlook, respect for the traditions of this music, and the smarts not to let that respect get in the way of what it set out to do. Audacity, assurance, and the spirit of cooperation ... 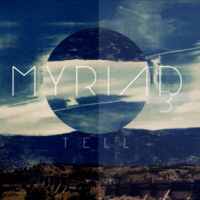 Three young guys in suits. Piano trio with a “band" name. Canadian. All original compositions except for “C Jam Blues." Wait, “C Jam Blues"? What? No indie rock covers? Well, then there's no way these guys could be Canada's answer to The Bad Plus. No electronics or sampling. Well, then Myriad 3 are not Canada's answer to EST, either. Yet, fans could be forgiven for thinking about those two groundbreaking piano trios while listening to Myriad 3's engaging and thought-provoking ...

Tell is the debut of Myriad3, a young, Toronto, Canada-based trio formed in 2011 after its members met on local gigs. Recording the album over just two days the following year, the trio's interplay and sense of togetherness belie both its members' youth and the relatively recent establishment of Myriad3 as a unit. There's a very democratic feel to the trio's work with no obvious leader, no obvious follower, and each player taking the role that best suits the music ...