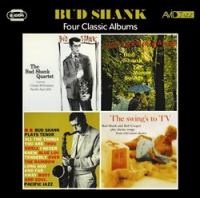 Bud ShankFour Classic AlbumsAvid Records UK2012Bud Shank is typical of the jazz musicians that roamed the West Coast in the fifties in that he was able to work comfortably in a variety of settings: big bands, the studio, and clubs. Like many of the other players, Shank also played more than one instrument, which made him a valuable member of the bandstand and afforded his solo recordings a bit more variety than ...

Jake Fryer second recording, In Good Company, finds the British alto saxophonist recording in San Diego with fellow altoist Bud Shank and his rhythm section. Fryer's previous release, On Our Terms (Nuts About Jazz, 2008), was the live debut of the London Bebop Collective; Fryer also leads the Jake Fryer Quartet and is part of the Little Big Band. With two saxophonists in front, it is not surprising that this turns out to be a blowing session in ... 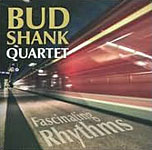 In the Wild West, when a cowboy passed away while doing his job, whether herding cattle, branding a steer or engaging in a gunfight, the popular saying was that he “died with his boots on." The adage applies as well to renowned alto saxophonist Bud Shank, who recorded what was to be his final album, Fascinating Rhythms, at the Jazz Bakery in Culver City, CA on January 29-31, 2009--less than three months before his passing at age eighty-two after a ...

Bud Shank: A Voice for the Ages

I'll always have fond memories of the 2007 Prescott (Arizona) Jazz Summit, as it was the last time I had the great pleasure of seeing and hearing the phenomenal alto saxophonist Bud Shank doing what he did best: enfolding an entire audience in the palm of his hand with a seemingly endless stream of irrepressible notes and phrases that arose from his heart and soul and cascaded gracefully through the bell of his horn.

During the past few years I have had the honor to work with many famous jazz musicians, but without a doubt the nicest one of that group was Bud Shank. In thinking about Bud, and his contributions to the jazz world the past 60 years or so, one must rank his demeanor right next to his extensive music abilities.Bud would listen to you intently. It did not matter whether you were a fan rushing up to him on ...

Bud Shank: Never at a Standstill

Bud Shank has long been labeled as a cool or “West Coast Jazz" stylist, though the veteran alto saxophonist, now in his seventh decade as a performer, has long evolved past such labels. An alum of Charlie Barnet, Stan Kenton and Howard Rumsey's Lighthouse All Stars, Shank first began leading his own quartet during the '50s and recorded extensively for Pacific Jazz/World Pacific while also doing studio work. In the '70s, Shank formed the LA Four with Laurindo Almeida, Ray ...

At a time when most of his contemporaries are content to relax on a couch or easy chair and watch their favorite TV programs and sporting events, alto sax superstar Bud Shank is on a roll. Hard on the heels of Graham Carter's splendid documentary of Shank's career, Against the Tide: Portrait of a Jazz Legend, and its companion CD, the eighty-two-year-old Shank, who continues to blow up a storm, has been honored by the Tucson, AZ, Jazz ...