Gregg August: How To Have That Difficult Conversation

Composer and Bassist Gregg August's Dialogues on Race was composed 10 years ago and was inspired by the election of Barack Obama combined with his discovery of the compelling story of Emmett Till. Now, a decade later a decision to step beyond the safety of the music was motivation to record it with the intention of facilitating a conversation on this sometimes awkward, sometimes difficult, yet vital discussion about race. This episode features music from Gregg August's GRAMMY-nominated ... 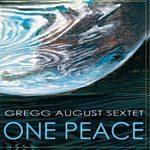 When last heard from, Gregg August's debut, Late August (Iacuessa, 2005), left listeners with a smile for the bassist/composer's bipolar emphasis on Latin and hard bop interests.

This is the second release by classical conservatory-trained New York-based bassist and composer Gregg August, an Assistant Bass Principal of the Brooklyn Philharmonic and a frequent collaborator with experimental composers collective Bang on a Can. One Peace is a more straight-ahead jazz showcase than August's Latin-flavored debut, Late August (Iacuessa Records, 2005). This time August worked closely with the experienced members of his sextet over the last year in a way that solidifies the interplay and trust between them all.

Bassist Gregg August is a dynamic and vastly underrated arranger and composer. On One Peace he enhances a hard bop template with complex chord structures, layering of inimitable horn arrangements and echoes from other musical genres. On “Nastissimo for example, trumpeter John Bailey, altoist Myron Walden and tenor man Stacy Dillard play almost mournfully over the quicksilver vamp by August, pianist Luis Perdomo and drummer EJ Strickland. “One for Louis" showcases Bailey, who plays throughout with a ...

Bassist Gregg August's pedigree is hard bop, and his trademark compositions have heads that examine every harmonic and melodic possibility and are almost stories unto themselves. His sextet recently played a lively set at New York's Fat Cat, and a few of the tunes they performed are featured on August's new album, the somewhat self-titled Late August. “Sweet Maladie opens with a hard bop head, then shifts into a robust Latin groove. Donny McCaslin takes a strong ...

This is a pretty intruiging and ambitious debut for upstate New York bassist/composer Gregg August. August wanted to have all of his musical experiences reflected on this first date. From education at SUNY-Albany, the Eastman School of Music, and Julliard, he became the principal bassist in La Orquesta Cuitat de Barcelona, Spain, and then lived in Paris as a jazz musician. His growing interest in Cuban music, notably changui (a kind of Cuban folk music), led to positions with Ray ...

More and more we seem to be witnessing a cross-pollination of musicians trained in one form of music, but ultimately actively engaged in another. Bassist Gregg August majored in classical performance when he attended the Eastman School of Music, but he also studied jazz forms with Bill Dobbins--another artist whose career has coexisted in both worlds--and composition/arranging with Rayburn Wright. While he spent the early part of his career dichotomously working the New York jazz scene and taking the bass ...