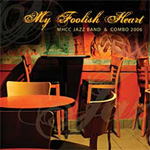 The Mt. Hood Jazz Band is best described as an anomaly--a community college ensemble that doesn't play like one. Director Susie Jones must be given at least partial credit for that. I'd say “You're doin' a heckuva job, Susie, but there's no telling where that could lead.

Seriously, these young musicians--most of them home-grown in Oregon--are in tip-top form on the school's third impressive album in roughly the last two years, all under Jones' astute direction. Eight selections are performed ...