Phil Dwyer: One Take: Volume Two / Let Me Tell You About My Day

BY MICHAEL MCCAW
September 20, 2005
Sign in to view read count
One of the most reassuring things there can be concerning any art form is that there are a number of exceptional practitioners. Not everyone can be recognized or revered as much as they deserve, but the fact that there is such a plethora of artists contributing to their medium means a continual evolution and survival. Canadian-based saxophonist Phil Dwyer is unknown to most jazz fans, but nonetheless he and his bandmates on One Take: Volume Two and Let Me Tell You About My Day once again prove that mainstream jazz is alive an well. Their inspired performances pull from the classic vocabulary using modern means of expression.

Driven by the dynamic Terri Lynn Carrington on drums, One Take: Volume Two is yet another example of how straight-ahead standard jazz interpretations can still sound inspired and hold ones interest. Working on the premise of pulling together strong musicians to record some well known tunes straight with no edits or overdubs, Alma Records pulled together Dwyer, Robi Botos (piano and Fender Rhodes), Marc Rogers (acoustic bass), and Carrington for this second incarnation of the series.

From the onset of the open and full sound of Carrington's ride cymbal, the musicians seem to click with the chemistry that often graced the Prestige dates of the past. Dwyer plays with a clean mid range tone on tenor that can build up to a hearty full sound with solid articulation that causes one to take notice of him. Another surprise is the play of Botos who whether in his comping or all out solos have a thematic development all there own creating compelling vignettes complementing the well work standard repertoire. These skills are well evidenced on tunes like "Nothing Personal where he swings with vigor with his right hand carrying most of the notes complemented by well placed chords and voicings with his left.

One Take: Volume Two closes on one of it's strongest tracks, a spirited Dwyer and Carrington duet version of the warhorse "Surrey with the Fringe On Top. Dwyer once again employs a fluid sense of harmony from theme to improvisation and back again with Carrington sounding crisp and fully engaged working more beside Dwyer complementing his statements than riding behind him. A highlight of the program, it makes you forget it's the same song you have heard crooned and reworked hundreds of times. 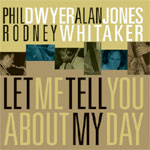 Dwyer's fluidity and strong technique is well evidenced throughout his own release on Alma Records as well. Paired here with long time associate Alan Jones on drums and bassist Rodney Whitaker, their sound has a buoyancy to it that recalls saxophone trios of the past but doesn't harken to the heavier mood saxophonists usually color it with. Consisting mostly of originals contributed by all three members, one of the most appropriate reference points both in form and playing would be along the lines of Sonny Rollins' Way Out West where the music is unhurried, full of invention, and there is an equality of musical contributions.

Dwyer's saxophone is afforded the most space, and by virtue of the instrument, often takes the lead with a confident muscular tone on tenor and also some firm soprano work that shines on Whitaker's "Winter Moon and its memorable melody. Jones may not be the legend that Max Roach has become, but his style is reminiscent of his abilities as a colorist. His ability to consistently provide intricate and melodic inventions even when backing another musician as he does behind Whitaker and his solo on "For Garrison contributes a great deal to the albums success.

Jones' "The Black Beer, named by his five-year-old daughter Naia, who rejected "The Black Bear" because it didn't sound like a bear but a beer, is one of the numerous highlights. Compositionally it is tightly knit with room for the improviser to move freely and confidently. The tenor's opening statements and solo are commanding and eventually give way to a Whitaker's melodic bass solo that carries attention through invention without manipulating the tone or feel of the song, rather, he works within it carrying it forward towards the closing theme.

Like One Take: Volume Two, all of the musicians bring their talents to the fore whether they have an established name or not. And hopefully their considerable abilities will garner them more success down the road. For now though, we have two albums that continue to impress within the modern mainstream vein and a saxophonist who will hopefully continue to document his playing.

Track Listing: It's You Or No One; Freedom Jazz Dance; Nothing Personal; Bemsha Swing; Alone Together; Listen Here; I Hear A Rhapsody; Surrey With The Fringe On Top.

Let Me Tell you About My Day

Track Listing: Afternoon In Paris; Narcolypso; The Black Beer; Refuge; I Can't Believe That You're In Love With Me; Two White Heads; Thangs; Camp Whitaker; Airegin; Winter Moon; For Garrison; Let Me Tell You About My Day.