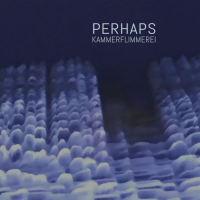 There's a gentleness to the architecture of Kammerflimmerei's Perhaps that is reminiscent of the melodic collaborations of Keith Jarrett and Jan Garbarek or Richie Beirach and Dave Liebman. But this time the group comprises two German musicians, Lothar Hotz on piano and Sarah Schüddekopf on saxophone. And what a gem they've unearthed!

Schüddekopf's sax playing swings low and sexy as easily as it evokes profound beauty. The opening of "Arabeske" is a case in point; unaccompanied, her intro seems to float in space, where she is joined by Lothar's rolling left-hand rhythm, a repetition she builds upon to ascend and twist and twirl, not unlike a kite tethered to the ground yet playfully whipping back and forth in the wind.

Lothar accompanies Schüddekopf 's efforts with subtle rhythmic impulses filled with powerful and imaginative turns which often grow in intensity as a piece progresses. One can discern something of the German Romantic impulse in his playing, but with the warmth of an early summer sun. For example, on "Dream Trance," after stating a sweet bluesy opening, Lothar breaks out in Jarrett-like ruminations which run across the piano, sprinkling the keys with his right hand while his left churns out a bass motif. The same is true of "Sweet Drops," another stunning composition, which captivates the ear like Monet's water lilies captivate the eye. And then there is the bittersweet "Agust," a musical sonnet filled with just the right pinch of sadness.

The best part of Perhaps is the duet's ability to inspire each other. Like orange lilies in bright sunlight, Lothar and Schüddekopf deliver a radiance of intimacy and beauty.