Oscar Peterson: Perfect Peterson: The Best of the Pablo and Telarc Recordings

By DAN MCCLENAGHAN
February 9, 2007
Sign in to view read count 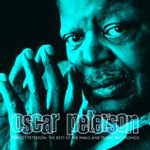 The back cover photo on this two-disc set is a shot of the inimitable Oscar Peterson in a light-toned suit with a wide necktie that sports a swirling, quasi-paisley pattern. The photo's in black and white, but we can guess at a riot of colors; and that phrase could serve as a decription of Peterson's piano style: a light-hearted riot of swinging colors.

The two discs span Peterson's career from 1953 until 2000, covering a surprising array of styles and ensemble configurations, given that the pianist is best known for his work in the piano/bass/guitar trio format. The long span is a little misleading, though. Only two of the tunes here are from Peterson's 1950s output: "Tenderly" and "How High the Moon," both featuring bassist Ray Brown and guitarist Herb Ellis. From there the chronologically arranged disc one jumps to 1979 for Django Reinhardt's "Nuages," which teams Peterson with violinist Stephane Grappelli, bassist Niels-Henning Orsted Pedersen and drummer Mickey Roker for a journey into gyspy swing.

Pianists are often said to "tickle the ivories." Oscar Peterson, with his light, dancing, often flashy touch on the keyboard, is a master ivory tickler; but he can also show a dark-toned and introspective side, as he does in the opening of his original composition "Nigerian Marketplace" from the album Freedom Song/The Oscar Peterson Big 4 in Japan (Pablo, '82) with guitarist Joe Pass, bassist Niels-Henning Orsted Pedersen and drummer Martin Drew.

Trumpeter Dizzy Gillespie sits in on two numbers, the classic "Caravan" and "If I Were a Bell." He and Peterson are an interesting pairing, with trumpet and piano tickling and blowing a competition to see who can play the most notes.

Perfect Peterson is a great introduction to a great pianist, with album/CD identifications listed for each tune, for those who want to explore the recordings which grab them.

CD1: Tenderly; How High the Moon; Nuages; Blues Etude; Caravan; I'm Getting Sentimental Over You; Summertime; If I Were a Bell; (Back Home Again In) Indiana; I'm Confessin' (That I Love You); Nigerian Marketplace; On the Trail. CD2: Honeysuckle Rose; Kelly's Blues; Wheatland; In a Mellow tone; Tin Tin Deo; Nighttime; Reunion Blues; Satin Doll; Ja-Da; Morning in Newfoundland.