By DAVID RICKERT
February 20, 2008
Sign in to view read count 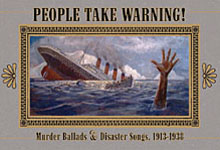 Ever since the Titanic sunk we have been fascinated by this disaster, memorializing it in several books, television shows, and movies. But long before Leonardo DiCaprio was born, the earliest pioneers of records were cutting musical eulogies to the passengers of the ship. These balladeers were the tabloid writers of the day, often stretching the truth for dramatic effect, but who cared? What mattered was the emotional content of the song, and if a message about the hubris of man could be included at the end, that was all for the better.

People Take Warning!: Murder Ballads and Disaster Songs, 1913-1938 collects some of the earliest recorded music, all of which deal with people meeting an untimely demise. During the Depression there was an insatiable demand for these records, some due to the ghoulish nature of the crimes, such as men killing their pregnant lovers, or merely to make sure that the victims of tragedies did not go forgotten. Often these songs contained a moral or warning, particularly those dealing with the price of technological progress through train wrecks, or those who reminded their listeners of the power of God through floods and boll weevils.

The collection is divided into three discs: "Man vs. Machine," "Man vs. Nature," and "Man vs. Man." Each of these is a fascinating excursion in ethnomusicology. Many of these songs were quickly written, sometimes using a borrowed tune and featuring hastily written lyrics, as there was no time for craftsmanship in the hurry to rush the records out into the market. They feature the simplest of accompaniment, usually banjos, violins, and guitars, and frequently only a couple of musicians perform each track. Very few are accomplished musicians or singers, at least not by today's standards. Yet this was a time when music still performed a social function in the transmission of values and important stories, and that was something that almost anyone could do.

What you will hear is early folk music akin to Alan Lomax's work, a collection that admittedly has a very narrow audience. But give this collection a listen and you'll hear some startling work. It's interesting to see how it all plays out; the "Man vs. Nature" recordings seem to feature the best melodies, whereas the "Man vs. Man" disc features some of the most coldly matter of fact recordings you'll ever hear. Clarence Ashley's "Naomi Wise" is absolutely terrifying, and it's a sure bet that at least a couple of recordings on each disc will grip you with their great stories told through simple melodies.

As you may guess the sound quality of these recordings isn't the best, but that isn't due to the remastering as much as the quality of the source material. Some of these come from records that probably took quite a bit of searching to uncover and weren't in the best shape (although some would argue that the hiss and pop only adds to the charm). However, it's amazing that these obscure recordings have lasted at all; surely no one at the time would have though that almost a century later their recordings would still be around.

Tompkins Square has certainly come up with a captivating way to release these early recordings. The stories behind each are captured in brief annotation of each song. Add an introduction by Tom Waits and a historical essay by Henry "Hank" Sapoznik and fantastic packaging (the cover painting is too cool) and it's easy to see why this collection was nominated for a Grammy for best Historical Recording. They have continued the work of the original artists by helping preserve the legacies of those who died too early. Although they have died too, their legacy lives on through the fascinating collection.