By MARK CORROTO
August 7, 2002
Sign in to view read count 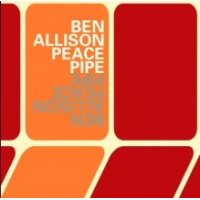 Enough already with labeling bassist Ben Allison in the "talent-deserving-wider- recognition" classification. He has certainly arrived, or at least he has made it without all the young lion baggage.

His carry on luggage includes establishing the Jazz Composers Collective ten years ago, a musician-run, non-profit dedicated to creative musicians new and inventive endeavors. Along with Frank Kimbrough, he has resurrected the somewhat lost music of the genius composer Herbie Nichols. Allison's Riding The Nuclear Tiger and the Herbie Nichols Project Strange City gained recognition on many critical top ten release list last year. He seems to have a way of playing jazz as a natural extension of his years. In other words, music by and for thirty-somethings, instead of thirty-somethings playing music from thirty-some-years-ago.

Peace Pipe plots a twist from the road traveled by Allison's band. Then it doesn't (let's get there a little later). He assembles his usual cast of Frank Kimbrough, Tomas Ulrich and Michael Blake and invites kora player Mamadou Diabate into his band. Diabate's kora, an African string instrument, sounds like a mix between a harp and a sitar. Widely used today in African pop music, the Kora initially raises your "uh-oh, world music coming" defenses. But Allison calms your fears with a rather seamless interaction between the New Yorkers and Diabate from Mali.

Of special note here is the playing of saxophonist Michael Blake. His horn has graced sessions with the downtown band Lounge Lizards and this year released what might be the best record of the year, Elevated (Knitting Factory). Blake draws from repetitive lines and extended forms, not in angry waves but with sheer gracefulness.

Peace Pipe is about extending the concept of jazz as Duke Ellington once did, by drawing from surrounding forms but never disguising your purpose. In fact Allison utilizes Ellington as inspiration on the opener "Third Rail" from the NY subway system and later plays a very Ellingtonian tribute on "Realization," with his arrangement.

Allison could be considered a modern version of Charles Mingus with his heavily folk- influenced music. Allison's folk is that of Neil Young "Goin' Back" and Jamaican inspiration on the title track. He even shows a reggae connection with his arrangement of Diabate's composition "Dakan." The folkish nature of this music allows for this unusual (to jazz) kora sound to fly under the radar or at least, easily fit within the themes spun here. Just as Eric Dolphy introduced the bass clarinet or Dewey Redman the musette to jazz, the kora finds a welcome home.