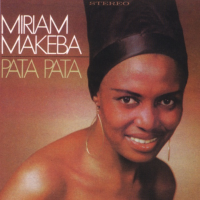 Originally released on Reprise in 1967, Pata Pata was Miriam Makeba's first album for the label, after a period recording for RCA. She had written the title song in 1956, when she still lived in South Africa, and recorded it with the Skylarks, the vocal harmony girl group of which she was a member. The Reprise version, as heard on this album, was released as a single and was a runaway hit, peaking at 12 on the Billboard Hot 100; this version, jointly credited to Makeba and Jerry Ragovoy, the album's producer, included a spoken passage in English which explained that, "Pata Pata is the name of a dance we do down Johannesburg way." In the discotheques at the time, a new dance called the Pata Pata was invented, adding to the track's popularity. This album has been reissued in many formats across the world since 1967, but this Strut Records version trumps the lot. It has been mastered from the original reel-to-reel tapes, giving the sound an immediacy and clarity that is remarkable for its age. The album, which is available on CD, double vinyl LP, streaming and digital, includes both mono and stereo versions. Housed in the original sleeve with the original notes, it is a pity that—beyond Makeba herself—no musician credits are included, as the soundscapes which support her are rich in detail and compellingly energetic; in particular, the pianist, acoustic guitarist and percussionist repeatedly command attention. While the title track obviously merits attention, by no means is this album a hit single plus ten filler tracks; on the contrary, it would be harsh to label any of the tracks as filler. Every one of them radiates commitment and joie de vivre from all concerned. Up-tempo, danceable music predominates, but it is interspersed with songs which show different facets of Makeba's prodigious talent. Several of them—notably, the poignant "What Is Love," the joyful "Ring Bell, Ring Bell," "West Wind" (later covered by Nina Simone) and the politics of "A Piece of Ground"—could challenge "Pata Pata" as the album's best track. Altogether, Pata Pata is an under-appreciated classic which demonstrates why Makeba richly deserves her place in the South African pantheon. Unconditionally recommended.