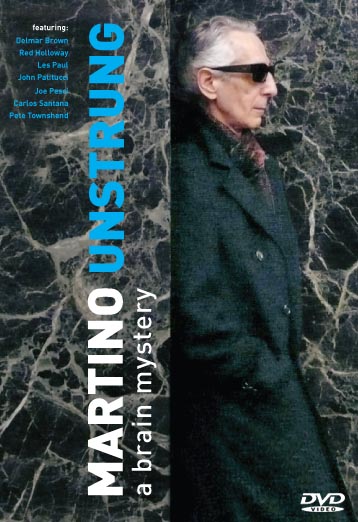 There is active dispute over whether guitarist Pat Martino's playing has the drive and edge it had before his brain surgery in 1980. Tenor saxophonist Eric Alexander, one of the many (briefly) talking heads in this documentary, says: "I like his sound better now." The film includes a few astute comments on Martino the musician—the best, surprisingly, coming from Who guitarist Pete Townshend.

But it's the surgery that is the central concern. Don't expect a musical portrait of Martino or even much of his playing. This is a documentary about Martino's brain—and sad to say, illuminating it mostly isn't.

The voices speaking are often doctors. We see sessions between Martino and the former as his short-term memory is tested (it's pretty bad) and he's questioned about longer-term memories (with decidedly mixed results). There are even scenes of Martino undergoing a CAT scan and viewing the results. When told that the missing parts of his brain—excised with a tumor—included portions that control emotions, Martino says: "What is missing is disappointment, criticism and all the dilemmas that made life so difficult."

But what memories Martino does have are often haphazard and fragmentary, and if this film is trying to mimic the way his brain functions, it very exasperatingly succeeds. It follows no systematic chronology and is assembled as if every separate sequence was shot and then shattered into myriad fragments then mixed together. No scene stays on screen very long and there are abrupt skips from brain scans to band rehearsals to talking heads to Martino and his wife playing guitars to—and this one is really surreal—his neurosurgeon talking in a garage filled with Porsches and Ferraris.

We never really learn how Martino—who before the successful outcome of the surgery didn't know his family or that he was a heralded jazz musician—remastered the art of jazz guitar. Various explanations are floated, including this conundrum from his neurosurgeon: "It's not so much he rediscovered the music as the music rediscovered him."

Jazz is lucky to have Martino active again in 2009. But disappointingly, this film doesn't tell us how he returned, although it does hint at a fascinating journey.