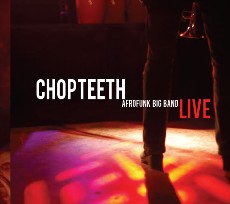 Washington, DC-based Chopteeth isn't exactly an Afrobeat band, not all of the time anyway. Fela Kuti pieces figure in its set list, but so do "belle epoque" tunes from Guinea's Le Simandou De Beyla, Senegal's Orchestra Baobab, Congo's Tabu Ley Rochereau and other African stars of the period. Chopteeth is best described as a post-independence, African music repertory orchestra, in conception not unlike trumpeter Wynton Marsalis's Jazz At Lincoln Center Orchestra—the difference being that it plays music not native to most of its members' own culture.

And does it with flair and conviction. The band debuted on disc with Chopteeth (Grigri Discs, 2008). The new album captures it live in three DC clubs, with excellent sound and not too much crowd noise, and is even more enjoyable than the debut.

There are three Afrobeat covers: Fela Kuti's "J.J.D." from J.J.D. Johnny Just Drop (Afrodisia, 1977) and "Question Jam Answer" from Music Of Fela: Roforofo Fight (Jofabro, 1972), and Femi Kuti's "Traitors Of Africa" from Fight To Win (Fontana, 2001). Trumpeter Cheryl Terwilliger's horn charts stick close to the originals and are punched out with enthusiasm; the vocals on both Fela tunes are simple calls-and-responses, again sticking close to the originals (though ringing the occasional gender exchange); and the solos—from trombonist Craig Considine, trumpeter Justine Miller, saxophonists Trevor Specht and Mark Gilbert, guitarist Michael Shereikis, and keyboardist Jon Hoffschneider—are gutsy and in the groove.

Only one track fails to convince: Rochereau's "Gagne Perdu" is let down by the vocals. But Rochereau, "the Voice of Lightness," is, anyway, a well nigh impossible act to follow.

The other nine tracks are certified winners.