Thom Rotella 4-tet: Out of the Blues 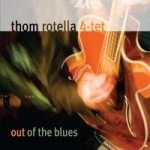 Let's hear it for the straight-ahead, blues-drenched, Blue Note circa 1955 blowing session. Sometimes after feasting on the rich duck pate of ECM or the decadent foie gras of Winter & Winter, the listener just craves the black-eyed peas and collards simplicity of the blues. Let's also hear it for a full, round arch top guitar tone, each note audible, each chord distinct. That pretty well defines Thom Rotella and his guitar style.

Another facet of Rotella's guitar style is that he is fluent in the language of Wes Montgomery and he is not four bars into the opening "Who Dat?" before he starts throwing off those octave chords. However, Rotella does not belabor the point Llew Matthews two sporting piano choruses. Luther Hughes (yes, the same who played bass with Gene Harris in Three Sounds) stretches an elastic acoustic bass that walks effectively in step with veteran drummer Roy McCurdy.

Rotella provides seven of the ten selections on this disc, all with a keen blues sensibility. The previously mentioned opener and "Bluze 4 Youze" are tasteful, playful romps. Rotella's chordal comping behind Matthews is tasty and perfectly placed in pitch and tempo. Of the three standards on the recording, "My Foolish Heart" is played the straightest and "The Way You Look Tonight" the most abstractly. In fact, this latter interpretation is one of the boldest to be carried off so well.

So let's hear it for the meat and potatoes of jazz, the blues, played with just enough virtuosity to support it and not get in the way. Thom Rotella has been around and proves with "Out of the Blues why he has the staying power.

Who Dat?; Bluze 4 Youze; My Foolish Heart; The Dr. Is In; Never Say Goodbye; The Way You Look Tonight; All Ways; I Hear a Rhapsody; Shimmer; Be Here Now.