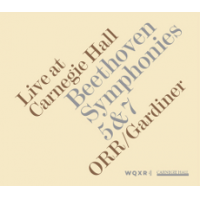 Why return to this tired, old repertoire? Twenty years ago, Sir John Eliot Gardiner and his period instrument band, Orchestre Revolutionnaire et Romantique, produced the leader of a deluge of Beethoven Nines performed on period instruments, or by period practices, or both. The Deutsche Grammophon Archiv Produktion imprint even managed to perfect the engineering necessary to capture the warmth and personality of period performance when compared to the set recorded by Sir Christopher Hogwood and The Academy of Ancient Music and mere four years earlier for the same label. Did Gardiner need to tread this well-worn road again in the twenty-first century? Considering that his subject matter is the pinnacle of all musical thought, it was Gardiner's indulgence, but his obligation to do so.

The pairing of Beethoven's Opuses 67 and 92 is a popular one. Wilhelm Furtwangler and the Vienna Philharmonic recorded the pair in 1955 (EMI Classics), capturing that conductor's post-war demeanor and passion. While Furtwangler's wartime Beethoven Fifth and Seventh (Deutsche Grammophon, 1944/1989) are overtly militant and pedantic, his postbellum Beethoven carries with it a sweetness and true humility. Wagnerian Christian Thielemann and the Philharmonia Orchestra made some noise with their 1996 recording of the two symphonies. Predictably, their tempi was slow compared to the period-performance practitioners, but the execution remained solid. More recently, enfante terrible Gustavo Dudamel and Simon Bolivar Symphony Orchestra of Venezuela produced an admirable pairing for DG (2006).

However, the single finest performance of the Fifth Symphony to date was coupled with an equally expressive Seventh occurs on Carlos Kleiber's recording with the Vienna Philharmonic (Deutsche Grammophon, 1975). It is this recording that is the standard by which all else is compared. Kleiber approaches the symphonies with a restrained exuberance that, after nearly 40 years, has yet to be challenged in the modern instrument-performance realm. While Gardiner's new set with his Le Orchestre Revolutionnaire et Romantique does not challenge Kleiber in the modern instrument arena, it most certainly equals it on period instruments and in performance.

Opus 92 begins almost tentatively, in search of the most difficult of Beethoven's openings in his Poco Sostenuto—Vivace. This neither lasts long nor retards the momentum Gardiner is picking up for the remainder of the piece. The famous Allegretto finds Wagner's "apotheosis of dance" at the near-molecular level, the tempo slightly faster than conventional wisdom, but never sounding rushed. The remainder of the symphony can only be described as excited and joyous. The tempi of the Presto, assai meno presto and Allegro con brio movements are propulsive with jubilance, bright as sunshine.

Opus 67, the famous Fifth Symphony is the widowmaker of the classical repertoire. Screw this one up and no one takes you seriously. Gardiner previous scored high points with his 1994 recording and has properly tempted fate with this new reading. The opening Allegro con brio of the Fifth symphony has only its brother opening to the composer's titanic Third (Op. 55) to compare. In the same way that, according to critic Martin Williams defining swing as "any two notes played in succession by (bassist) Paul Chambers," these two opening movements define the meaning of allegro con brio.

The Fifth Symphony is about triumph and the listener is shot full of such in the third and fourth movements, the latter as joyous as the whole of the earlier Seventh Symphony. The sonics and engineering of the two works is exemplary for a live recording. We must secretly hope that Gardiner has a new, live-performance cycle in mind with how finely these giants of the repertoire turned out. This music is the eternal flame of civilization: that evidence that we are the lesser angels, but angels nevertheless.