Laura Dickinson: One for My Baby: To Frank Sinatra with Love 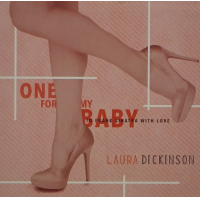 Paying homage to the Chairman of the Board is never quite an easy thing to do, but vocalist Laura Dickinson takes on this challenge and delivers one of the best tributes to the crooner on her astonishing debut album One for My Baby, To Frank Sinatra with Love. Influenced by the sound early on in her life as a teenager and falling in love with Sinatra every time her parents played his music, the native Southern California songstress vowed to do her part in keeping his legacy alive. An in-demand performer in Hollywood, her voice is heard in the sound track of the hit movie Pitch Perfect, in various commercials and other Disney Channel projects.

On this remarkable debut, Dickinson offers some of Sinatra's favorite songs in a fifteen-piece repertoire performed by many of Los Angeles area's jazz masters presenting the music with classic arrangements by such designers as Sammy Nestico, Gordon Goodwin, Marty Paich and Alan Steinberger. Supported by a big band, the vocalist begins this blast from the past with the Sinatra staple "Come Fly with Me" then, belting the melody with crisp powerful vocals, turns the tables on the familiar "Learnin' the Blues."

The band and singer swing on the delicious "(Love Is) the Tender Trap" providing a rousing rendition of the classic. Bringing the sound down a few notches, Dickinson shows her softer side on the delicate "Guess I'll Hang My Tears Out To Dry" and the beautiful ballad of "Indian Summer." Her impeccable vocals seem the perfect fit on the familiar "You Go to My Head," while Burton Lane's immortal "How About You" is clearly one of the memorable tunes of the disc.

The music gets a bit intimate and tender with duets featuring guitarist Danny Jacob on "I Only Have Eyes for You" and electric bassist Neil Stubenhaus on the introspective "My Funny Valentine." The big band sound returns with Dickinson reaching on age old standard Sinatra loved to voice, "I'm Gonna Live Till I Die" and begins to wind down the project with two of the most associated Sinatra songs, "All The Way" and "One for My Baby" featuring pianist Vince di Mura on the piano.

Laura Dickinson introduces herself in the best way, paying tribute to one of the best singers in the world and surely, putting a smile on Sinatra's face as he fronts that big band in the sky, for One for My Baby, To Frank Sinatra with Love, is one impressive performance by a superior vocalist in one of the finest debut recordings around.

Come Fly with Me; Learnin’ the Blues; (Love Is) the Tender Trap; Guess I’ll Hang My Tears Out to Dry; You’re Getting to Be a Habit with Me; Here’s to the Losers; Indian Summer; You Go to My Head; How About You; The Best Is Yet to Come; I Only Have Eyes for You; My Funny Valentine; I’m Gonna Live Till I Die; All the Way; One for My Baby.

Title: One for My Baby: To Frank Sinatra with Love | Year Released: 2015 | Record Label: Blujazz Productions