By John Eyles
January 29, 2020
Sign in to view read count
It can often be difficult for a record label to follow a release as successful as Another Timbre's monumental five-disc set Morton Feldman Piano has proved to be, so the next wave of five releases on the label is particularly interesting. Of the five, two are by British composer Frank Denyer who has had two previous recordings on the label, including its third release, Music for Shakuhachi (2007), which jostled for attention alongside improv releases by players such as John Butcher, Phil Minton and Phil Minton among others, and was an early sign that Another Timbre would also be committed to releasing contemporary composed music.

Denyer has had a long and varied career which has taken him to many countries, both in his own right and as part of the Barton Workshop, with whom he plays piano. The two very different albums, below, feature Denyer compositions from 1974 onwards and convey the richness and variety of his music...

In a 2018 interview Denyer told VAN magazine, "I wrote a large piece for 35 musicians, "The Fish that became the Sun," years ago. The majority are invented instruments, 89 new instruments, including eunuch flutes. Nobody knows what they are—I have all the instruments, they're in my garage. At about 50 minutes long it has never been performed. The one thing I want to get done in this life is to get it performed."

This piece was composed between 1991 and 1996, the time span being an indication of its epic scale. That is further emphasised by the large number of musicians who were involved in recording it, the range of voices used and instruments played, including eighty-seven made of discarded materials (referred to as "garbage instruments" in Michael Turnbull's sleeve notes; metal bicycle basket, anyone?) Denyer's own sleeve notes for the album describe in minute detail the locations of the musicians, all the way from a solo violinist onstage to eight cornets outside and surrounding the venue which, for this recording, was the Menuhin Hall, Stoke d'Abernon, Cobham, Surrey, in April 2018. Such attention to detail is also reflected in the score which was fully written-out, with no room for improvisation as such.

Totalling fifty-seven minutes, the piece builds from an introductory passage from that lone violin, through to an epic finale which features a dialogue between the cornets outside and the musicians inside throughout its eleven-minute duration. Curiously, although the composition plays continuously and is not sub-divided into sections, on the disc it is divided into fourteen tracks, which has the effect of emphasising its episodic nature. Despite the number of musicians involved, they are not all heard together, which means that frequent shifts occur throughout the piece, sometimes quite unexpectedly; track 12's shift from a promising percussion ensemble to a vocal interlude featuring two small children is one of the less predictable non-sequiturs. The glue that holds everything together throughout the piece is provided by the harmonious vocal passages which predominate, sometimes having to soldier on in the face of competition from the sounds of those garbage instruments.

The happy end to this story is that "The Fish that became the Sun (Songs of the Dispossessed)" received its world premiere at the 2019 Huddersfield Contemporary Music Festival and was hailed as a masterpiece. Given the logistical issues it poses, the next performance may be many years away, so anyone wishing to hear it will need to refer to this recording. 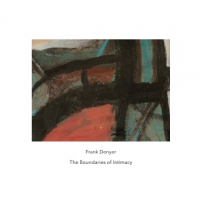 Frank Denyer
The Boundaries of Intimacy
Another Timbre
2019

Compared to the scale of the music on the above album, that on The Boundaries of Intimacy seems far more modest and intimate. Of its thirteen tracks, five feature a lone player, one has a trio and the remaining seven quartets. In several cases, the title of a piece practically describes the line-up, such as the engrossing opener, "Mother, Child and Violin" in which a mother's fragile, wordless vocals lead, followed by those of her child, sometimes in imitation, with the violin remote from them; the music makes it seem that strong, dramatic forces are at work but these are never made explicit and remain unresolved; edge of the seat listening.

Just as intriguing are the six brief pieces which comprise "Two Female Voices and Two Flutes," the title of which again describes the line-up; as well as their vocals, the two singers knock and scrape a cloth board and fleetingly tap one of four porcelain bowls—yes, Denyer's innovative means of producing sounds existed prior to "The Fish That Became the Sun"; although not immediately comprehensible, it is impossible to deny the fragile beauty of this piece's music.

Two substantial pieces dominate the rest of the album. The eighteen-and-a-half minute "String Quartet," dating from 2017/18, is far removed from conventional string quartets as this quartet play notes together rather than the players having different parts which weave together; the overall effect is innovative but also highly listenable. The twelve-and-three-quarter-minute "Beyond the Boundaries of Intimacy" (not quite a 'title track') features Joe Zwaanenburg on flute plus the first use of electronics in a Denyer piece, although the electronics are often so subtly deployed as to be almost inaudible; the quietness and restraint of the music demand the same of its listeners, drawing them in and thereby forcing them to concentrate in order to catch every nuance and detail.

The album is completed by two shorter solo pieces from the mid-'70s which hark back to earlier Denyer; Nobutaka Yoshizawa plays two different versions of "Piece for Koto," while Elizabeth Smalt plays sneh—a stringed, bowed instrument, designed by Denyer—on two versions of "Frog," written in Ahmedabad in India. The Boundaries of Intimacy gives a more rounded picture of Denyer than The Fish That Became the Sun but, ultimately, it is practically impossible to recommend one over the other to those seeking to familiarise themselves with his work. The two are very different but equally essential; best listen to both and compare them.

The Fish That Became the Sun (Songs of the Dispossessed)

Tracks: The Fish That Became the Sun (Songs of the Dispossessed)

The Boundaries of Intimacy