Chris Foreman: Now Is The Time

By HRAYR ATTARIAN
December 23, 2015
Sign in to view read count 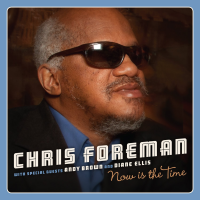 As the house organist at the legendary The Green Mill as well as a member of various ensembles Chris Foreman is one of Chicago's unsung jazz heroes. As a sideman Foreman has marked several recordings with his soulful, earthy grooves and, finally he has released an album under his own name. On his much-anticipated debut Now Is the Time Foreman interprets, unaccompanied or in duets, several covers with his unique laid back charm and organic style.

Much like his greatest influence, Jimmy McGriff, Foreman often alternates masterfully between the Hammond B3 and an acoustic piano. He opens the McGriff's "Cotton Boy Blues" with overlapping gospelish organ and contemplative, angular piano phrases. The piano's brief, percussive cascades echo the gritty organ's swelling sonic waves creating a haunting, intricately woven piece that is simultaneously evocative and ardent.

Half the record consists of intriguing and intelligent dialogues between Foreman and versatile guitarist Andy Brown. On the standard "I Cover the Waterfront" Foreman's sharp, crisp yet thick tones build a buoyant spontaneous melody. Brown answers with resonant rhythmical strums. A quieter melancholic mood prevails on the second half with Brown's reverberating strings flowing from Foreman's wistful expectant refrains.

The disc's closer, "The Peeper," features alto saxophonist Diane Ellis whose serpentine, agile silvery threads wind around Foreman's hefty indigo hued bars. The tune is the perfect pairing of Foreman and Ellis as saxophonist Hank Crawford, one of McGriff's frequent collaborators, composed it. Ellis wails with warmth and passion over Foreman's greasy, red-hot keys. A clear acerbic tone marks her short yet emotive and lithe extemporization.

With this engaging, elegant and enjoyable work Foreman demonstrates that he is a consummate musician and skillful performer who has forged a singular sound that is forward looking yet remains steeped in tradition. Of course his audiences have always known this, but now so will music lovers everywhere.