By JOHN EYLES
May 23, 2021
Sign in to view read count
With his Debut label, founded in 1952, Charles Mingus is often credited as being the first musician to set up his own independent record label, to avoid the hassle of working for major companies. Although Debut was rather short-lived, it paved the way for other improvising musicians to set up their own labels with greater success; notable examples are Incus, set up by Derek Bailey, Evan Parker and Tony Oxley in 1970, and Eddie Prevost's Matchless which began in 1979, both still active as of 2021. Nowadays, labels started by musicians are so numerous that listing them all would be a daunting task. The most recent musician to throw his hat into the ring is electric guitarist N.O. Moore (Nathan to his friends...) whose dx/dy recordings (not to be confused with Sweden's dy/dx...) issued its first two albums early in 2021....

Moore is a long-standing member of Prévost's renowned improvisation workshop which has been running weekly on Friday evenings in London since late 1999; the guitarist is so established that he is one of a select few who are called upon to lead the workshop on evenings when Prévost cannot attend. Saxophonist, flautist and clarinetist Sue Lynch was a workshop regular for years before branching out and establishing the Horse Improvised Music Club in 2013; she plays at the Horse regularly, in a variety of groupings. Before the millennium, Crystabel Riley toured Japan and Europe using drums, electronics and make-up, in noise trio Maria and the Mirrors. After being encouraged to attend the Horse, she began playing regularly with Lynch, with whom she still collaborates.

Secant | Tangent captures Lynch, Moore and Riley improvising together as a trio for the first time; it was recorded live at London's Iklectik and comprises two extended tracks with a total playing time of fifty minutes. It is very impressive for a first performance together. While each of them is clearly an accomplished player with their own individual sound and style on their instruments, most impressive is the way in which they complement one another, allow each other space in which to stretch out and fit together like the pieces of a jigsaw, thus creating a distinctive group sound. As Steve Beresford comments in the album's sleeve notes, the three were completely absorbed in "virtuoso listening." This trio has a bright future. 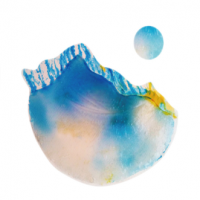 Improvisers Inside Electronics
The Birds of Four Mirrors
dx/dy recordings
2021
As the quartet's name, Improvisers Inside Electronics, suggests, this album is very different to the label's first release. All four members of this ensemble have been regular attendees at Prévost's workshop, and Prévost himself wrote this album's sleeve notes. (Incidentally, another workshop regular, Mirei Yazaawa, provided the distinctive cover artwork for both of these releases.) All four players here employ electronics in one form or another, with Moore himself cryptically being listed as playing "stereo field and dark energy," a significant shift from the "electric guitar" of the above album or even his occasional credit on other recordings, "guitarism." So, with electric bass, objects, acoustic guitar and modified tape echo, Theremin and ring modulator also at the players' disposal, the album's five studio-recorded tracks— running time, thirty-three minutes— display few recognisable sounds characteristic of instruments; the electric bass and acoustic guitar are not noticeably deployed in any conventional way.

Instead, the four players produce soundscapes which are rich in detail, shift kaleidoscopically, and can never be taken for granted. Some of the passages here are occasionally reminiscent of music on Orbit (Bandcamp, 2020) or Dark Before Dark (577 Records, 2021) both by another product of the workshop, the larger London Experimental Ensemble which includes in its ranks Moore, Tony Hardie-Bick and Antonio Acunzo, three-quarters of Improvisers Inside Electronics.

In the final reckoning, the first word of that group name outweighs the last word. After years attending the workshop, Acunzo, Hardie-Bick, Mills and Moore are improvisers through and through, having internalised Prévost's ethos of listening, not playing what you know, and searching for sounds, which holds true whether an individual is playing a conventional instrument, using their voice or anything else, electronic or otherwise. The end result is a collective investigation by four equals.

Along with Secant | Tangent, The Birds of Four Mirrors makes a very positive start for a label which promises to be unpredictable but endlessly fascinating...

The Birds of Four Mirrors