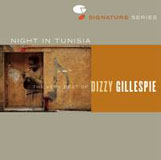 It's quite a stretch to call this CD the very best, since all of the music was recorded between 1946 and 1949. Dizzy Gillespie (1917-1993) was one of the leaders of bebop but also forged an important and unshakable relationship between jazz and Afro-Cuban music that lasts to this day. His recording career spans more than five decades.

The CD opens with "A Night in Tunisia, played with the kind of energy of which only innovators are capable. Ray Brown's bass comes in like a ball of fire, JC Heard's Latin drumming is devoid of clichés and Milt Jackson's vibes evoke sounds from another world. Gillespie solos first: a powerful, multi-dimensional statement that combines the melodic swing of his guru Roy Eldridge with Dizzy's own harmonic and rhythmic daring. The next solo is by Don Byas (tenor sax) and, unfortunately, is only half a chorus because it is eighteen bars of bebop genius. In fact, Byas' solo on "52nd Street Theme may be one of the deepest on this CD.

It's great that George Russell's revolutionary two movement suite, "Cubana Be/Cubana Bop, is included on this set. With a dramatic opening of only conga, tom-toms and a call-and-response between two trombones, this piece sounds as unique now as it did in 1947. "Cubana Be/Cubana Bop is one of those rare, well-done meeting places of traditional and avant-garde tendencies that make it a must hear for anyone who claims to be a jazz devotee. "Manteca is also one of Dizzy's (with Gil Fuller) best loved Latin jazz compositions and in this concise version the power of the big band is featured along with a somewhat rare tenor solo by Big Nick Nicholas. The lesser-known, but great "Guarachi Guarachi Guaro is expertly arranged by Gerald Wilson.