Oteri and associates research diametrically-opposed angles and a swirling architecture, extending similar frameworks, rendered by others, into a herculean endeavor, offset by a take-no-prisoners approach.
—Glenn Astarita, All About Jazz 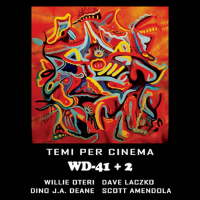 Available now on Bandcamp and worldwide on major streaming and download sites on August 19, 2022.

WD-41 + 2 Teme Per Cinema (Music for Film) was first released in 2010 through CD Baby and was also available at DGM Global Mobile and Abstract Logix. Teme Per Cinema and the first WD-41 album (WD-41) will be re-released in digital format through Symphonic Distribution worldwide and on Bandcamp. A limited number of CD copies will also be available.

The foundation for Teme Per Cinema was taken from live recordings of Oteri and Laczko freely improvising at Oteri's then home in Austin Texas. Dino J.A. Deane and Scott Amendola were then sent audio files to which they freely improvised their parts in various studios with the final mixes later completed by Oteri at his home studio. It was said by Deane to be one of his favorite works. This was one of Oteri's last guitar-based albums before switching his focus to tenor saxophone and flute.

All About Jazz Review

Temi Per Cinema is the follow-up to guitarist Willie Oteri and trumpeter Dave Laczko's self-produced WD-41 (2009), with the addition of lap steel dulcimer and beat jockey artist Dino J.A. Deane and drummer Scott Amendola. Collectively, the musicians have been at the forefront of new music-making, amid variable flavors and shades, bordering on the avant-garde, jazz-rock, electronica and other intertwining genres. Here, the WD-41+2 unit expands upon applications and concepts, first evidenced on the 2009 effort.

At times, Oteri and Laczko summon up notions of trumpeter Jon Hassell's legacy, via dark horns, sweeping electronics and atmospheric textures. But the differentiator here pertains to the musicians' portrayal of a portentous storyline, which could serve as the soundtrack to an avant, sci-fi video game. Featuring Oteri's detailed phrasings, budding undercurrents and Jimi Hendrix-like blasts, to coincide with Laczko's harrowing lines, the program offers a foreboding outlook composed of oscillating ventures into a vast neural network.

The band spawns a whirlwind abyss of fractured themes and scowling accents. On “AA-5," Laczko's stilted notes lead the charge atop a slowly climactic series of events, contrasted by loops, and the guitarist's deft single note attack, while Deane and Amendola execute unearthly underpinnings, often laying out a broad spectrum of ethereal treatments.

Each track bleeds into the next, mainly from a contextual standpoint. It's a program steeped within a deviant, ambient-electronica factor. Oteri and associates research diametrically-opposed angles and a swirling architecture, extending similar frameworks, rendered by others, into a herculean endeavor, offset by a take-no-prisoners approach. They accelerate the roads previously traversed into a frenetic cosmic experience on Temi Per Cinema.