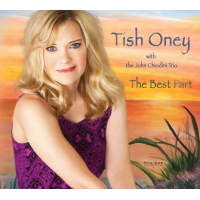 Each song on this album weaves its own thread in a tapestry displaying the best in life... For me, the best parts of embarking upon this journey have been honoring living songwriters, celebrating the talents of friends, premiering three never-released originals by Peggy Lee, and putting forth a collection of new music we can lift up as our own.

Oney was honored in 2016 to win the Jazz Artist/Group of the Year award from the South Carolina Music Awards, and in 2015 her high school honored her as one of the inaugural five 'Graduates of Distinction.' She was lauded in the book The Jazz Singers: The Ultimate Guide by jazz critic Scott Yanow. Tish was named a USC Winter Scholar for her development of two touring symphony shows and was named a Robert G. Boehmler Visiting Artist at Ithaca College School of Music. A recipient of The Diane Warren Award, Oney earned two initiations (by faculty at both IC and USC) into national music honor society Pi Kappa Lambda for her musical excellence. Dr. Oney earned her Doctor of Musical Arts degree with honors from the University of Southern California's Thornton School of Music, and a Master of Music degree with honors in Voice Performance from Ithaca College. Tish has served as Coordinator of Music, Director of Jazz Studies and Commercial Music, Director of Voice Studies and Director of Choral Activities. A prolific jazz journalist and contributing author to The Journal of Singing, Oney writes a quarterly column titled “Anatomy of a Standard," for All About Jazz.

As well as touring with her trio she is often featured with symphony and big band shows written by Grammy-winning arrangers Chris Walden and Bill Cunliffe as well as Juno-winner, Jason Goldman, and Joe Riposo. Oney has arranged several hundred pieces for jazz combo including hits from the Great American Songbook as well as her originals.

“(Oney's) choice of notes and use of space are quite sophisticated. Chiodini, a masterful accompanist and a subtle soloist, has a style that is perfectly complementary and plenty of musical magic takes place... Oney is an impressive singer with a subtle style within the jazz mainstream. She digs deep into the songs and shows that she is one of the more rewarding jazz singers... Highly recommended." —Scott Yanow, L.A. Jazz Scene)

“Dr. Tish Oney is one of the finest arrangers and composers on the jazz music scene today and her vocals are breathtakingly beautiful." —Joe Montague, Riveting Riffs Magazine

Regarding a live performance witnessed in Las Vegas, Las Vegas Jazz Society writer and Musician's Union President Frank Leone wrote: “By the end of her first tune it was evident that Oney had a beautiful voice, warm and low. . . She sang perfectly in tune with amazing breath control, and her time (meter) was impeccable, and most of all, phrased with complete respect to the lyric... I had the realization that I was listening to a true jazz singer doing a beautifully presented themed show, such as you might hear at a fine NYC jazz cabaret such as Michael Feinstein's by singers like Ann Hampton Callaway, Jane Monheit, or the late Blossom Dearie. I also recall that only once before, attending one of Cleo Laine's Las Vegas appearances, I said every singer in town ought to be here, for this is a singing lesson, as well as great performance and entertainment. I now can say the same thing of Tish Oney... (Tish possesses) superb pitch, infallible rhythm, and amazing ability as a scat singer, utilizing refreshingly new scat words and sounds. After performing her final selection, 'I Love Being Here With You,' it was more than evident that the audience loved being there with Tish and company." —Frank Leone, Jazz Notes!

“Oney has a truly pitch-perfect voice, wonderful phrasings, and enough swing or scat to own her personal page in the legitimate jazz singer's ledger. Tish Oney should give more famous singers like Diana Krall, Dianne Reeves, or Jane Monheit pause for concern. She's firmly on their trail." —Michael G. Nastos, All Music Guide

“A voice like Tish Oney's is a prime example of what other jazz singers strive for. Pitch perfect. Crystal clear. . . and all encompassing. Her innate understanding of the art (both emotionally and intellectually) not only reels you in willingly and begging for more, but creates a memory that lingers on far after she leaves the stage." —Michael Sterling, Producer, Sterling 's Upstairs at Vitello's, Los Angeles