It is the sheer poetry of the music and the lyricism of the renditions by Estrella Acosta that capture the imagination… a mesmeric array of beautifully crafted arrangements, and sensuousness in every lovingly caressed phrase of ‘Mujeres de Luna’. This is an album not to be missed by listeners of superbly performed music.. —Raul da Gama, Latin Jazz Network 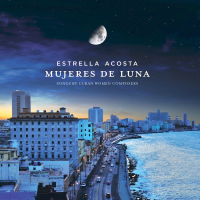 Cuban vocalist Estrella Acosta went on a search in the rich and beautiful musical history of her motherland. There she discovered innovative and rarely heard music composed by women during the last century. In this collection of beautiful songs, she highlights the important role played by women composers in Cuba’s music of the past 100 years. Featured are works by the likes of Marta Valdés, Maria Teresa Vera, Margarita Lecuona and María Cervantes, but also by female composers of younger generations.

Estrella’s warm, personal and original interpretations are supported by an all star band with creative arrangements for horns and strings written by Hilario Duran, Michael Simon and Mark Bischoff. The pieces are rounded out by inventive solos from Efraim Trujillo on saxophones, Mark Bischoff on piano, Michael Simon on trumpet and Orlando ‘Maraca’ Valle on flute. The versatile rhythm team of bassist Samuel Ruiz and drummer Enrique Firpi is completed by guest- percussionist Horacio "El Negro" Hernandez.

Last fall Estrella presented these songs during her theater tour of the Netherlands, where she lives, together with her Latin jazz quartet Esquina 25 and the all-female Pavadita String Quartet.

Now this homage is released worldwide: the album ‘Mujeres de Luna’ is available for digital download from iTunes, Google Music, CDBaby, Amazon and all your favorite web music stores. It can also be mail-ordered as a CD, with a 16-page booklet and nice pictures, directly from here.