SOURCE: ALL ABOUT JAZZ
February 10, 2008
Sign in to view read count 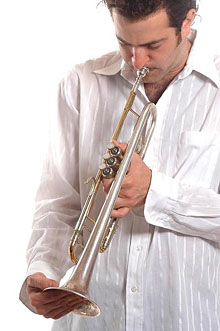 slideshow
On the new episode of The Jazz Session, Jason Crane interviews trumpeter and composer Avishai Cohen. (Not to be confused with bassist and composer Avishai Cohen.) Cohen is at the center of a vibrant musical scene in New York City -- full of experimentation, melding musical styles, and an appetite for adventure. More than that, Cohen is a philosopher-musician, using his compositions to explore larger societal questions. His 2007 album After The Big Rain (Anzic Records, 2007) looks at the planet after a worldwide flood. The album is the final part of a trilogy (although Part 3 was recorded first) that explores the steps leading up to the flood, the flood itself, and its aftermath.

Jason Crane is the host and producer of The Jazz Session, the weekly jazz interview show. He was born in 1973 in Lenox, Massachusetts, home of Tanglewood and former home of the famed Music Inn and the Lenox School of Jazz. He began his career as a soprano sax player in jazz, latin jazz and funk bands in Arizona, Pennsylvania, and right here on Hilton Head Island. Jason also worked as an on-air host for KUAT and KUAZ in Tucson, AZ; as a news announcer for Bloomberg Radio in Tokyo, Japan; and as Tokyo business correspondent for NPR's Morning Edition; and at WXXI in Rochester, NY. From 2001-2004, Jason was station manager and jazz host at Jazz90.1 in Rochester, NY.