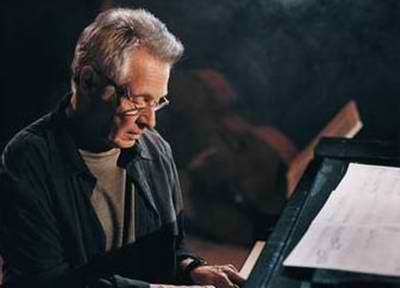 slideshow
The Jazz Arts Group of Columbus (JAG) is getting ready to roll out the red carpet for the Columbus Jazz Orchestra's next installment of the Great American Songbook season with Grammy Award-winning film composer Dave Grusin. From Mancini favorites “The Pink Panther Theme" and “Baby Elephant Walk" to movie classics like “Somewhere Over the Rainbow" and “As Time Goes By," A Night at the Movies (January 14-15) will revisit some of the most memorable movie music ever written.

When legendary Grammy Award-winning composer Henry Mancini died in 1994, he left behind an incredible legacy of film and television music whose jazzy and orchestral innovations inspired a whole generation of film scorers and jazz performers. Among his great friends and admirers was Dave Grusin, who drew upon the early Mancini influence to carve out his own Oscar-winning niche as one of the premier movie music writers of the past thirty years, as well as a prolific career as a contemporary jazz pianist.

Among his Academy Award-nominated work over the years have been scores for Heaven Can Wait, The Champ, On Golden Pond, Tootsie (he co-wrote the Stephen Bishop hit, “It Might Be You"), The Milagro Beanfield War (which won the 1988 Oscar), Havana, The Fabulous Baker Boys and The Firm. Other well known films include The Graduate, The Heart is a Lonely Hunter, Three Days of the Condor, The Goodbye Girl, And Justice for All, Reds, and Tequila Sunrise. In 1987, Grusin released Cinemagic, a compilation of new versions of his classic scores. Grusin also penned the theme songs for Norman Lear-produced '70s sitcoms Good Times and Maude, as well as the TV series Baretta and St. Elsewhere.

Grusin, along with drummer Larry Rosen, launched contemporary jazz mecca GRP Records, one of the most popular labels of the New Adult Contemporary genre, with popular artists like The Rippingtons, Spyro Gyra, David Benoit, Lee Ritenour and Tom Scott. Grusin's own hits for the label include Night-lines (1984), Harlequin (a duet album with Lee Ritenour in 1986), Sticks and Stones (a duet with brother Don in 1987), The Fabulous Baker Boys (a double Grammy winner in 1989), Migration (1989), and the tributes The Gershwin Connection (1991) and Homage to Duke (1993). He also participated in GRP all-star projects, Super Live, the NY/LA Dream Band and the three GRP All Star Big Band albums. In the tradition of his popular recent tribute recordings, Grusin reached into Mancini's vast, eclectic catalog for Two for the Road, a definitive retrospective which rings brightly both as a memorial and celebration of the man and his music.

Single tickets are available through the CAPA Ticket Office for $49 (main floor), $46 (first balcony) and $41 (second balcony). Tickets are available by phone at 614-469-0939 and through all Ticketmaster outlets. For more information call 614-294-5200 or visit jazzartsgroup.org.

The Great American Songbook music series is presented by the Jazz Arts Group with ongoing support from the National Endowment for the Arts, the Ohio Arts Council, the Greater Columbus Arts Council, the Columbus Foundation, and the Westin Columbus. Media support for A Night at the Movies is provided by The Columbus Dispatch and WMNI AM 920.